The story about a rare Heuer chronograph

The story about a rare Heuer. We are pleased to enlighten you about this special Heuer chronograph we’ve acquired 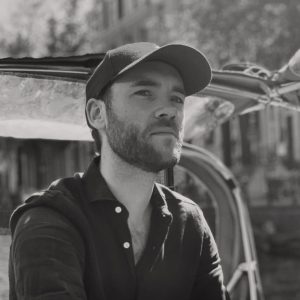 When it comes to vintage chronograph watches, a couple of factors determine the collectability and this watch ticks all the boxes. Let us give you some more insight into this Heuer and their history of watchmaking. 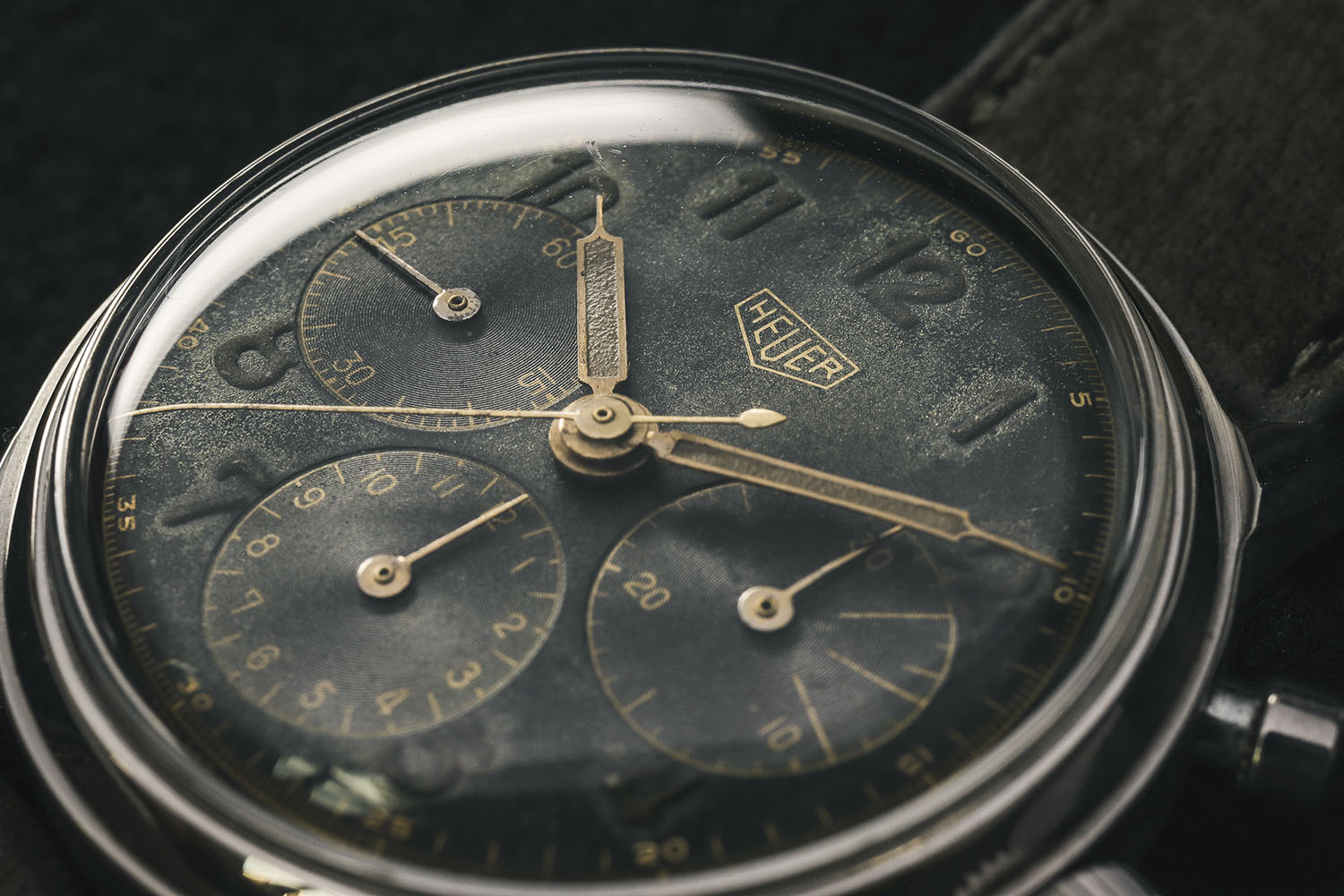 Dating back all the way to 1860, Heuer has a vast history of watchmaking. Since these early days, Edouard Heuer was recognized for his craftsmanship and accuracy when it came to his watches. 1882 was the year Edouard patented his first chronograph, and many more would follow. The worldwide public couldn’t ignore the Swiss watchmaker when Heuer was chosen as the official timekeeper for the Olympics in 1920’s in Antwerp, Paris, and Amsterdam. Jack Heuer, the great-grandson of founder Edouard, lifted Heuer to new heights from the 1950s on with the Carrera’s and Monaco’s. This has resulted in everlasting love for Heuer chronographs from watch enthusiasts all around the world.

There’s very little documentation on Heuer watches from before the 1950s and they are very rare, making this watch more interesting already. The reference for this Heuer is not even clear, it is known by both ref. 2913 and ref. 2447, Heuer can’t even confirm this. Most early models go by the 2913 reference so that’s what we’ll have to go with since our piece is from 1945. This watch is the first Heuer known with the triple-register chronograph after the era of duo-register chronograph watches. Therefore this watch can be seen as the Pater Familias of the modern Heuer chronographs. 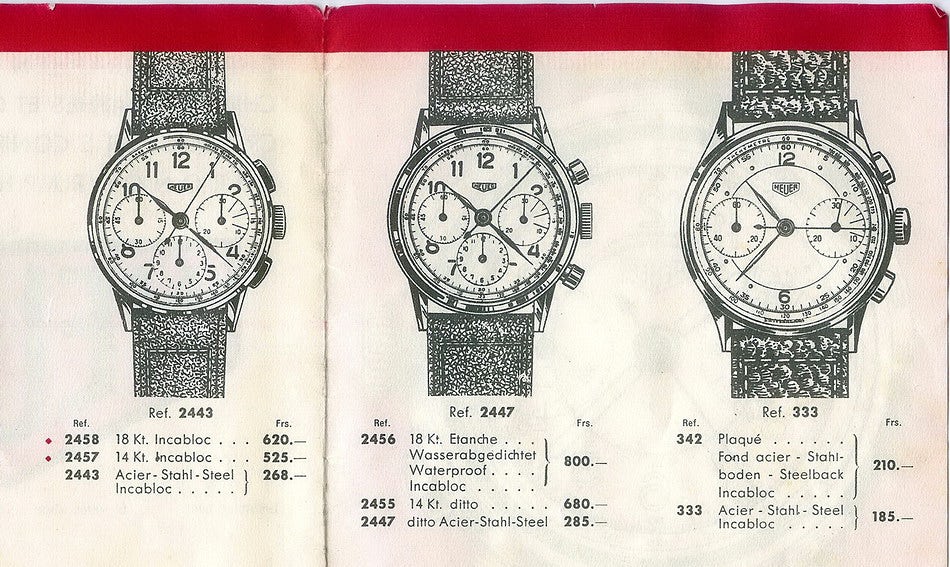 The precision of this watch comes from the famous Valjoux 72 movement. This movement was introduced in 1938 and this reliable and loved workhorse has been produced over 750.000 times when it’s production came to an end in 1974. Rolex even used this manual movement to power their early Daytona’s! A nice detail about this movement was the new ‘column wheel’, a new wheel in the chronograph function protecting the other wheels around it from wear of damage. You’ll need a sharp eye for it, but a fun gimmick about this much-appreciated movement is the distance between the pushers and the crown. On this watch, the distance between the top-pusher and the crown is smaller than the distance between the bottom pusher and the crown. Jack Heuer was a fan of this Valjoux 72 movement as well eventually using it in the early Carrera’s and Autavia’s. 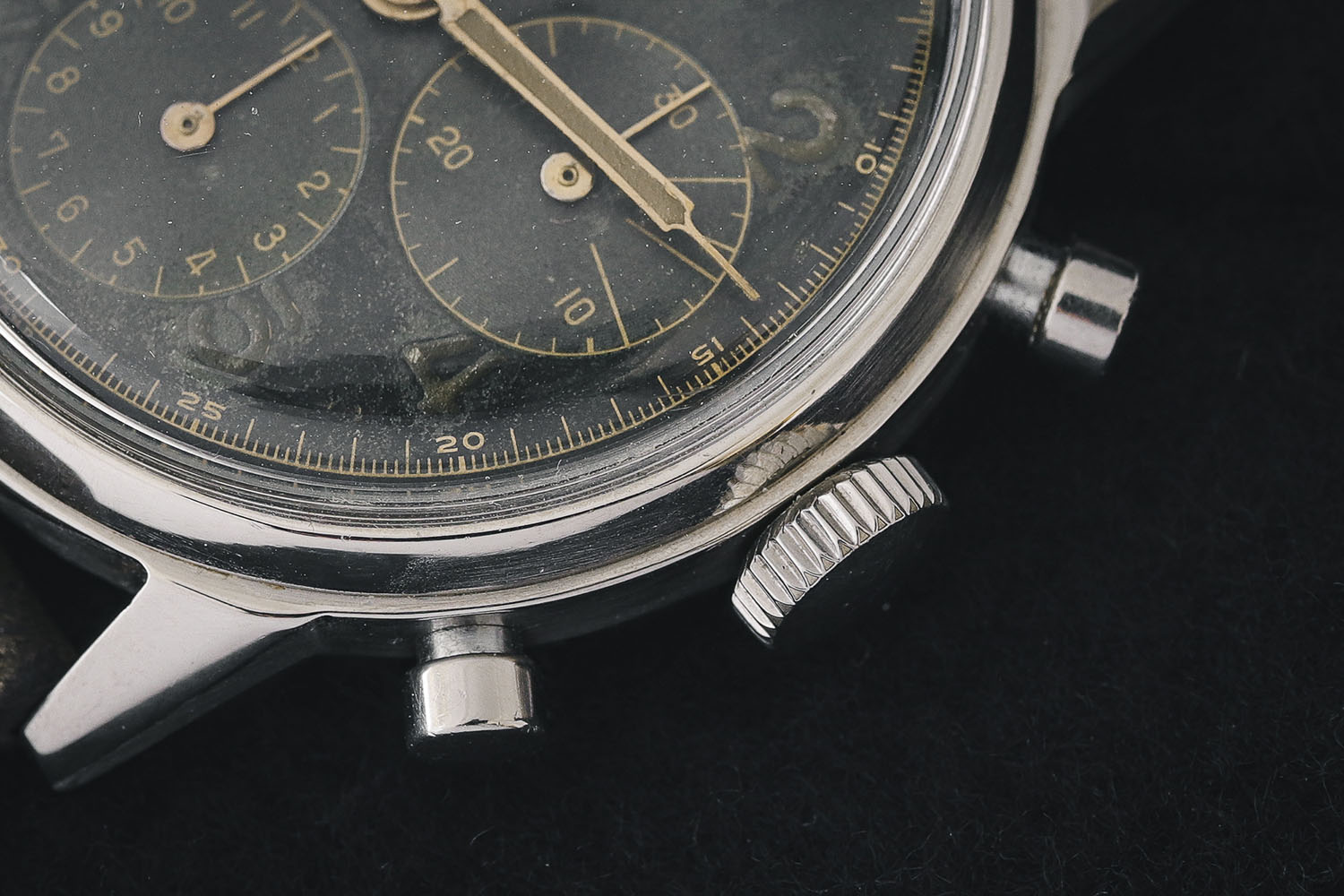 Heuer watches were always designed for a specific type of people, and this 1940s Heuer had the military as its target. Most important for Military watches; they had to be practical, precise and easily legible. To accomplish these standards, this Heuer got a bigger stainless steel case than most watches from this time. The case grew to 38mm. case diameter, a size which today still is seen as ideal. 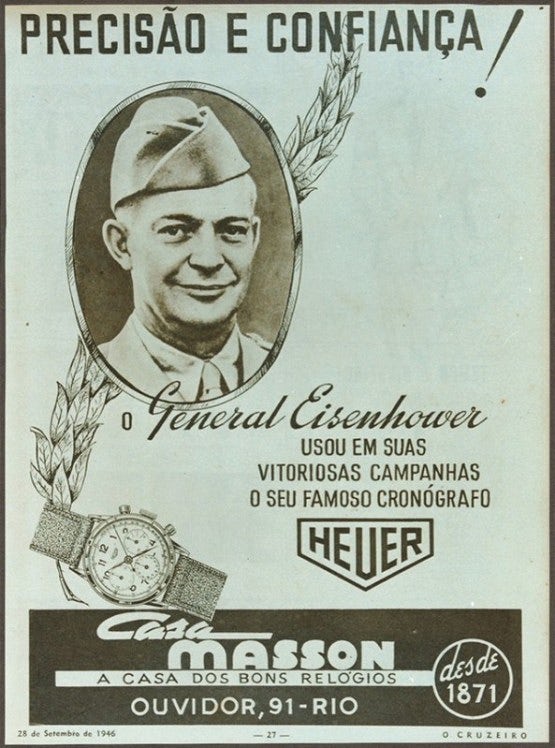 There is bigger desirability for the vintage ‘oversized’ chronographs in comparison to their smaller relatives. But what better publicity could’ve happened to this oversized Heuer; the General of the United States of America wore one and he agreed to be on an advertisement of Heuer. This Mr. Dwight Eisenhower, who later became president, promoted this watch with a slogan translated as ‘Precision and Trust!’, and so Heuer thrived on. 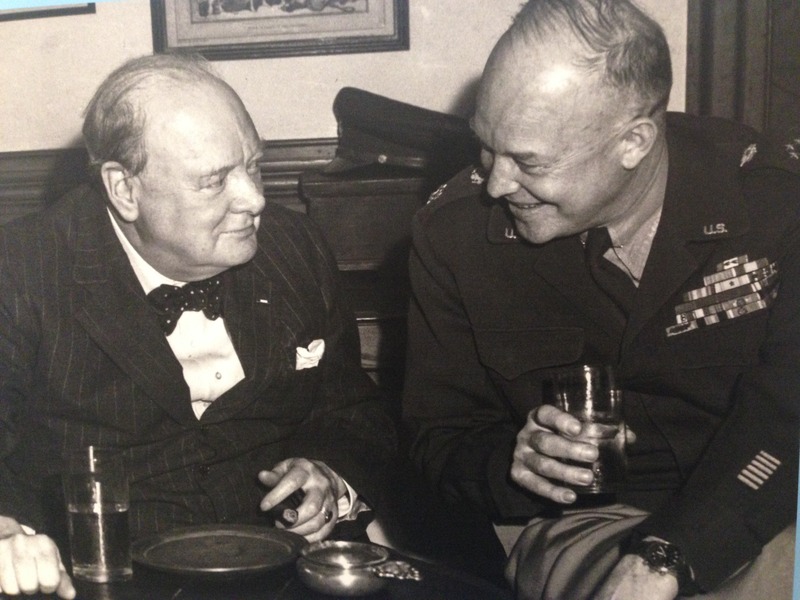 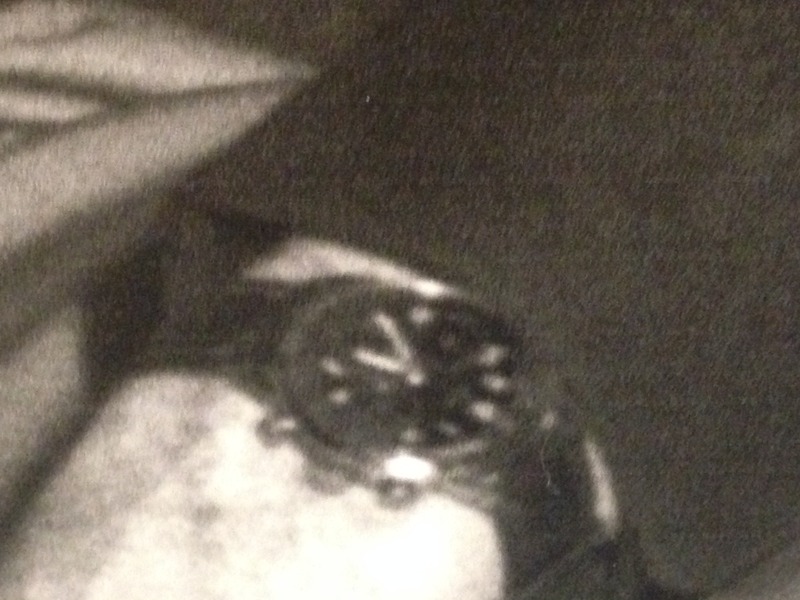 The looks of this military Heuer are astonishing.

The stainless steel case is impeccable and the facet-shaped lugs are still as sharp as a knife. The black dial has aged nicely and it has reacted in a way with the radium Arabic numerals. The radium indexes have turned into a dark green color and the black paint on the dial around it has turned to a matte black color with a shade of green as well. The patina on any watch will become unique over time, every watch lives its own life, but the way this dial has developed over time is incredible. Combine this with its undamaged gilt letter printing and the original gold military hands and you’ll get more than you could wish for in any military watch. It will be available soon in our store in the Reestraat 3, Amsterdam. Come by for a cup of coffee and maybe a chance to get a hold on this watch. 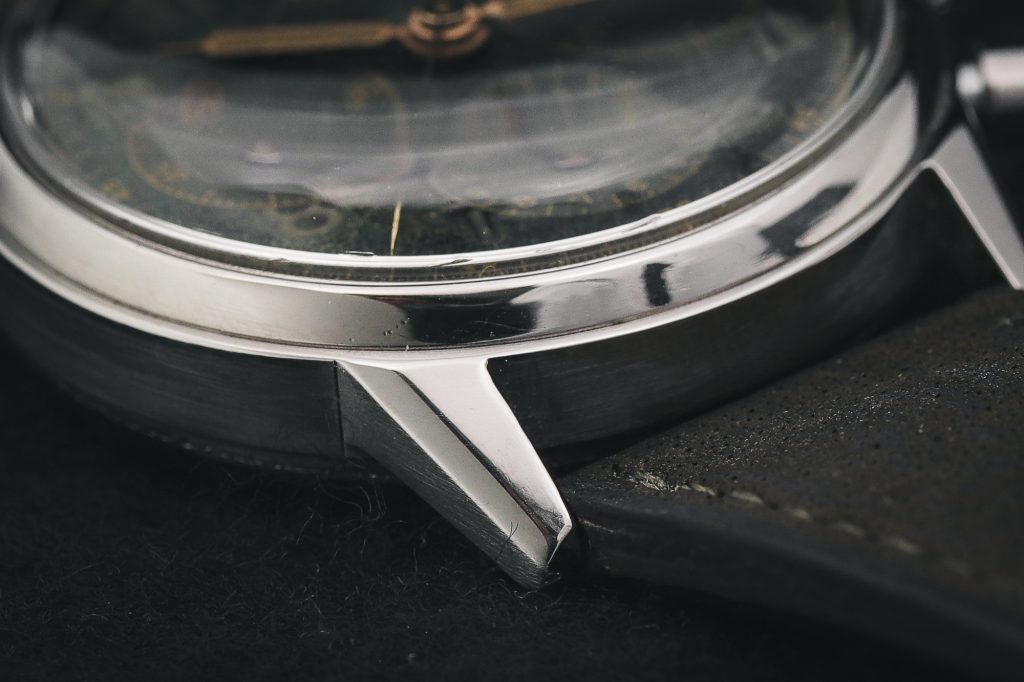 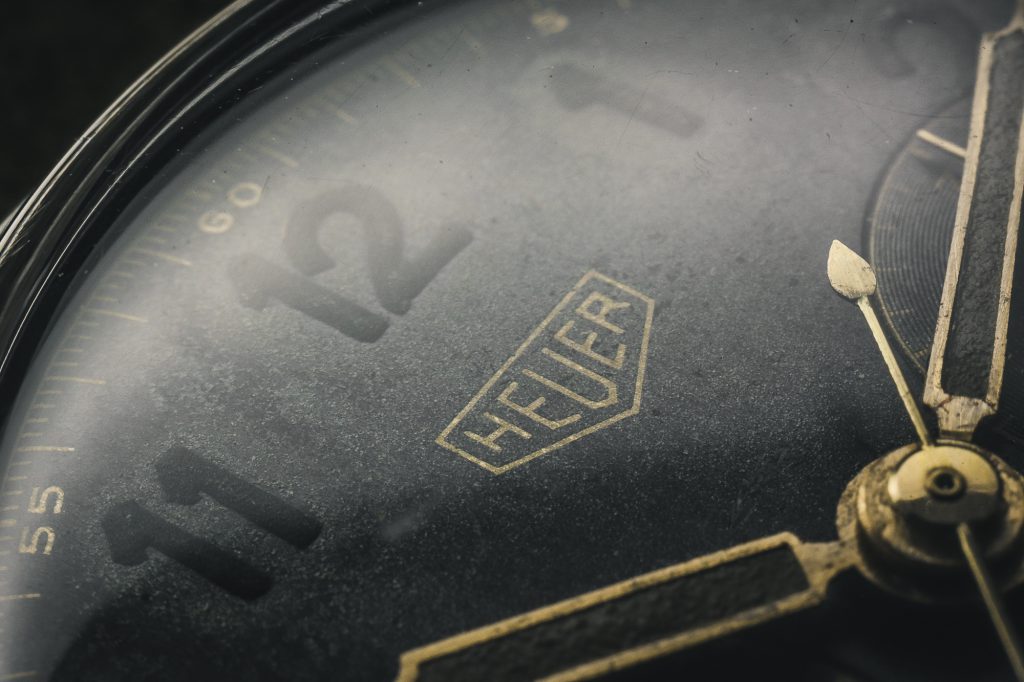 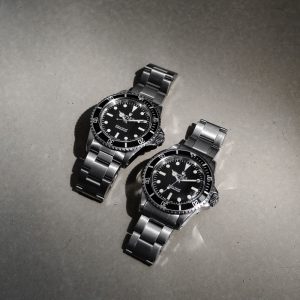 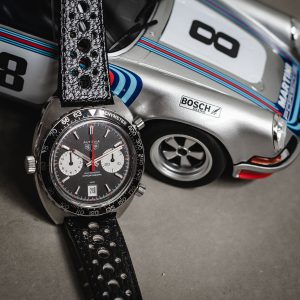 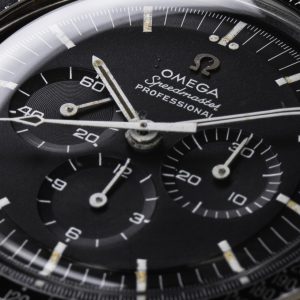