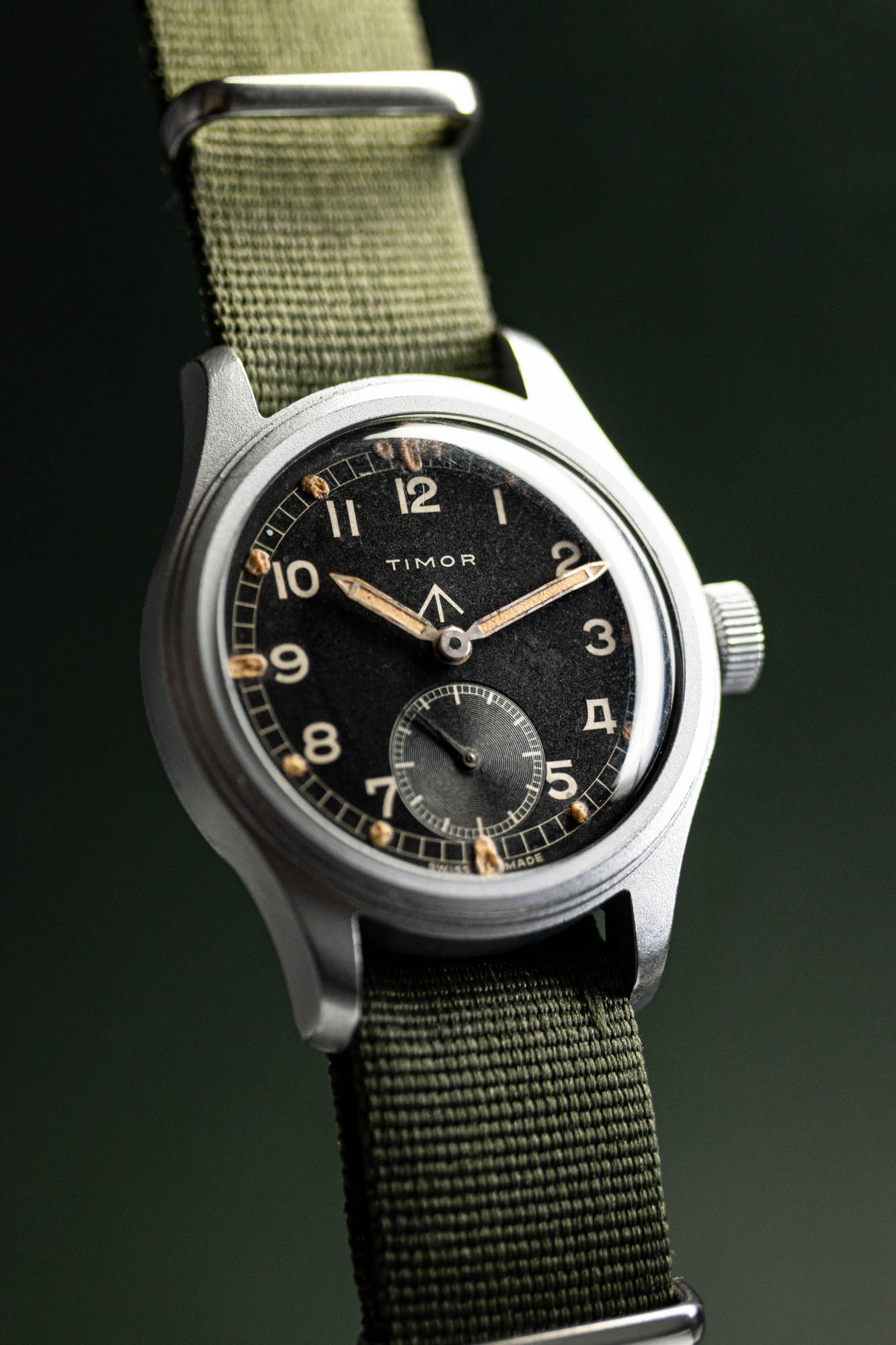 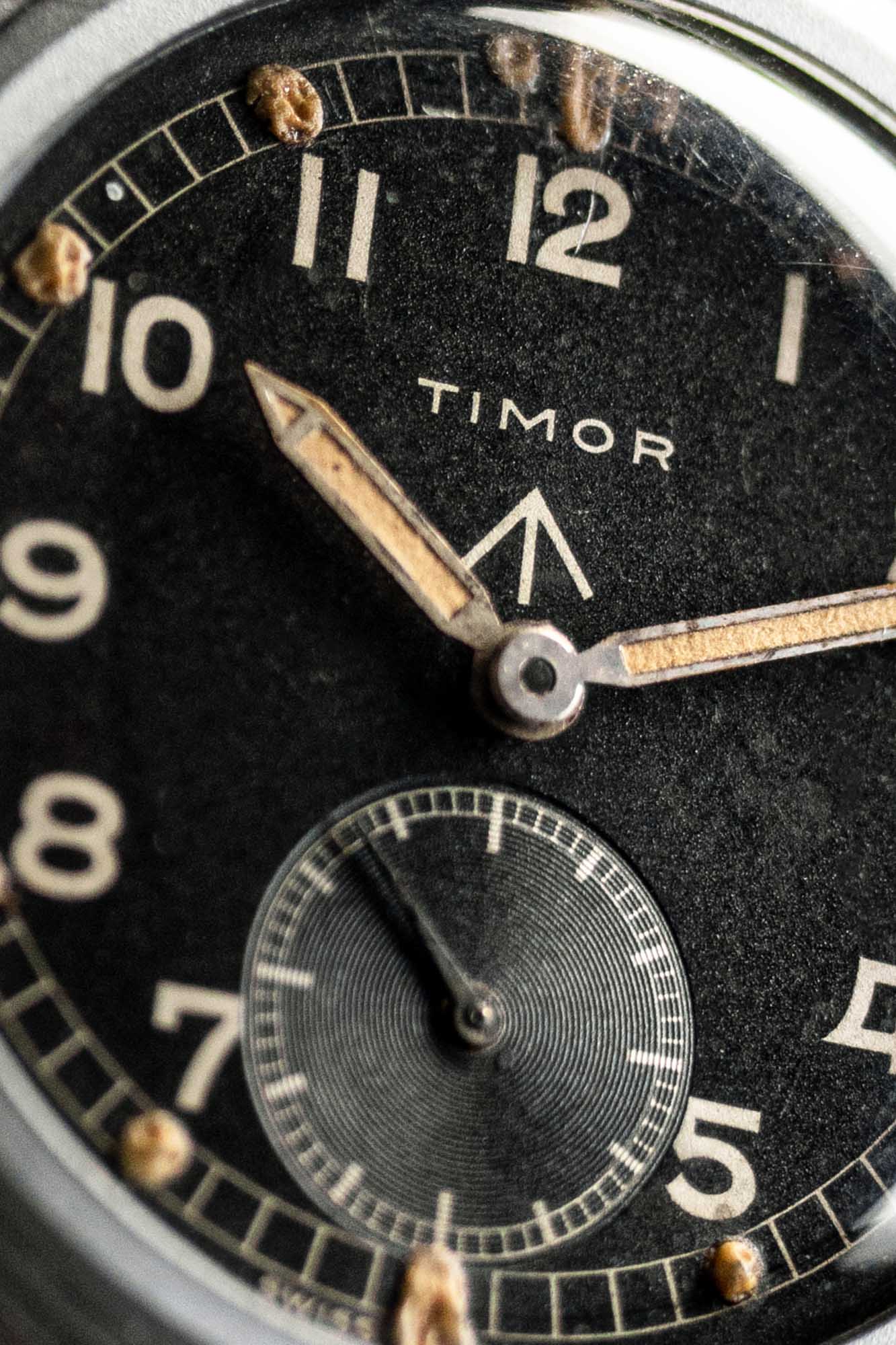 Most of us know this war movie with celebrities such as Charles Bronson, Telly Savalas, and Donald Sutherland. Now we are no film critics, but wow what a bunch of men! This movie is a reference to the nickname of this military watch.

Towards the end of World War II, the British army commissioned 12 (actually 13) watch brands to make a watch for the British troops. These were Buren, Cyma, Eterna, Grana, Jaeger Lecoultre, Lemania, Longines, IWC, Omega, Record, Timor, and Vertex. Enicar was also asked, but it was never delivered. The watch must meet a number of conditions: Black dial, waterproof, subsecond, luminous hands/index, and plastic glass.

So to speak, the watch brands went to work. There were 12 military watches on the market with some minor differences. The type of hands could differ or the material the case was made of. But all met the requirements of the British army. Because 12 brands made a watch, collectors say, Dirty Dozen, if you have the whole set.

The one we show you here is from Timor. Mr. Bernheim and Mr. Luthy founded Timor in La Chaux-de-Fonds, nestled in the heart of the Jura mountains. Their aim was to provide fine Swiss watches, that were built to stand up to everyday life. This Army WWW, Watches Wristlet Waterproof, has a beautiful patina. It shows that it has fought. It is wound by hand and is technically in order. This is a watch with a story where everyone could visualize something.

The original engraving on the back cover is the personal number of the man who carried it. It says something about where this person was stationed. A collector’s item.

Towards the end of WWII, the British MoD (Ministry of Defense) commissioned thirteen watchmakers to supply wristwatches for the allied troops. The brief went out to Longines, Vertex, Jaeger-LeCoultre, IWC, Omega, Buren, Grana, Lemania, Record, Timor, Eterna, Cyma and Enicar. All but Enicar eventually delivered, earning this bunch of companies the nickname: Dirty Dozen.

The nickname came later though. At the time, these were known as W.W.W; Waterproof Wrist Watches. The brief was simple: the watches had to be reliable, serviceable and waterproof. They would have a black dial with luminescent Arabic numerals, a sub dial for the seconds and a shatter-proof acrylic crystal. The case back would feature milspec engravings.

All twelve Dirty Dozen watches are slightly different. Subtle variations in case shape, hands and dials exist. Some are chrome-plated, others are stainless steel.

By the time the Dirty Dozen watches were ready for dispatch, the war was nearing its end. Some still saw actual military use during the second world war, others were used in later conflicts. Some never saw action at all.

There are vast differences in production numbers between the individual suppliers. This, in part, explains the serious difference in value among them. This is a rough estimate of the numbers of Dirty Dozen watches produced: