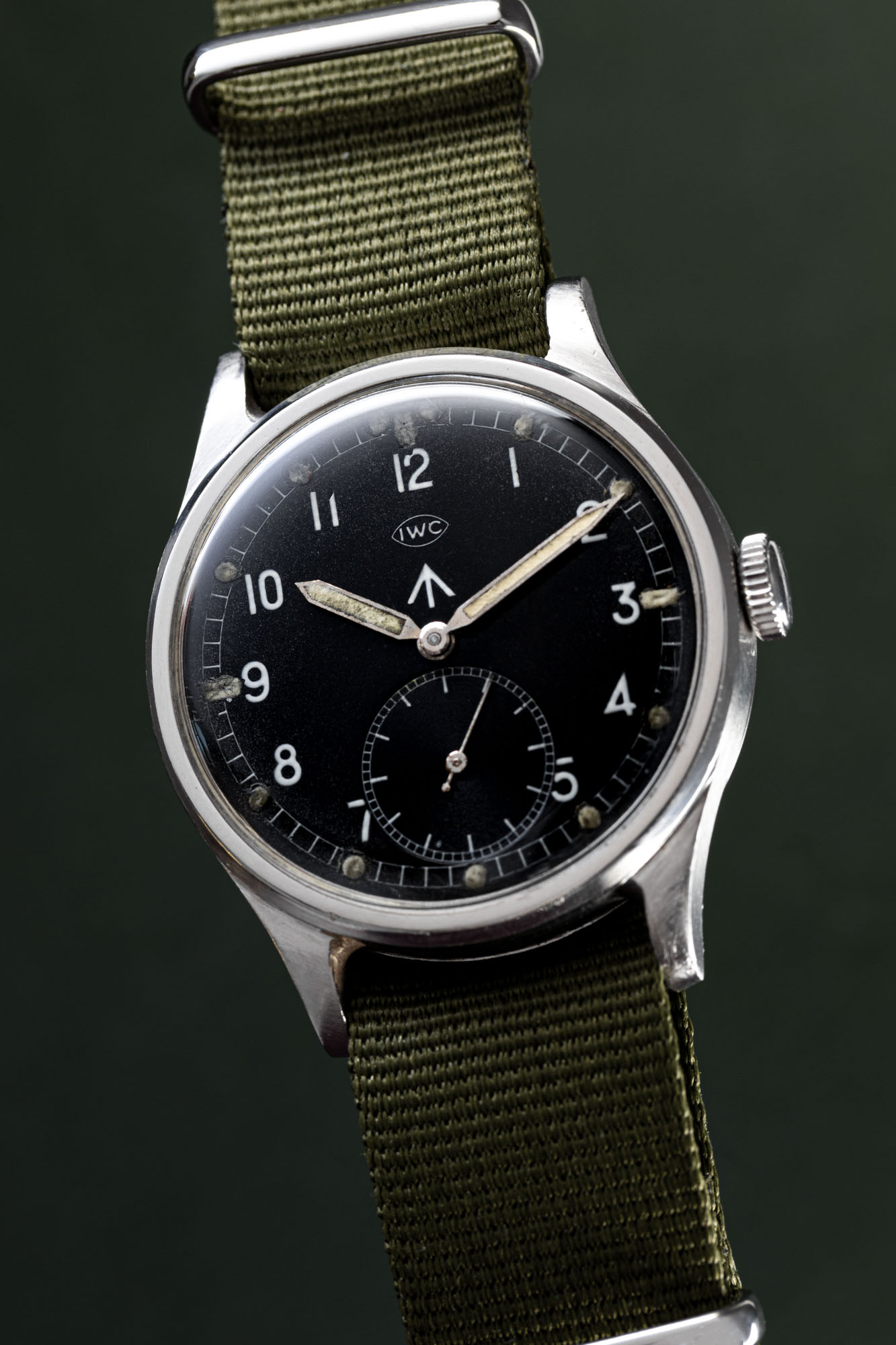 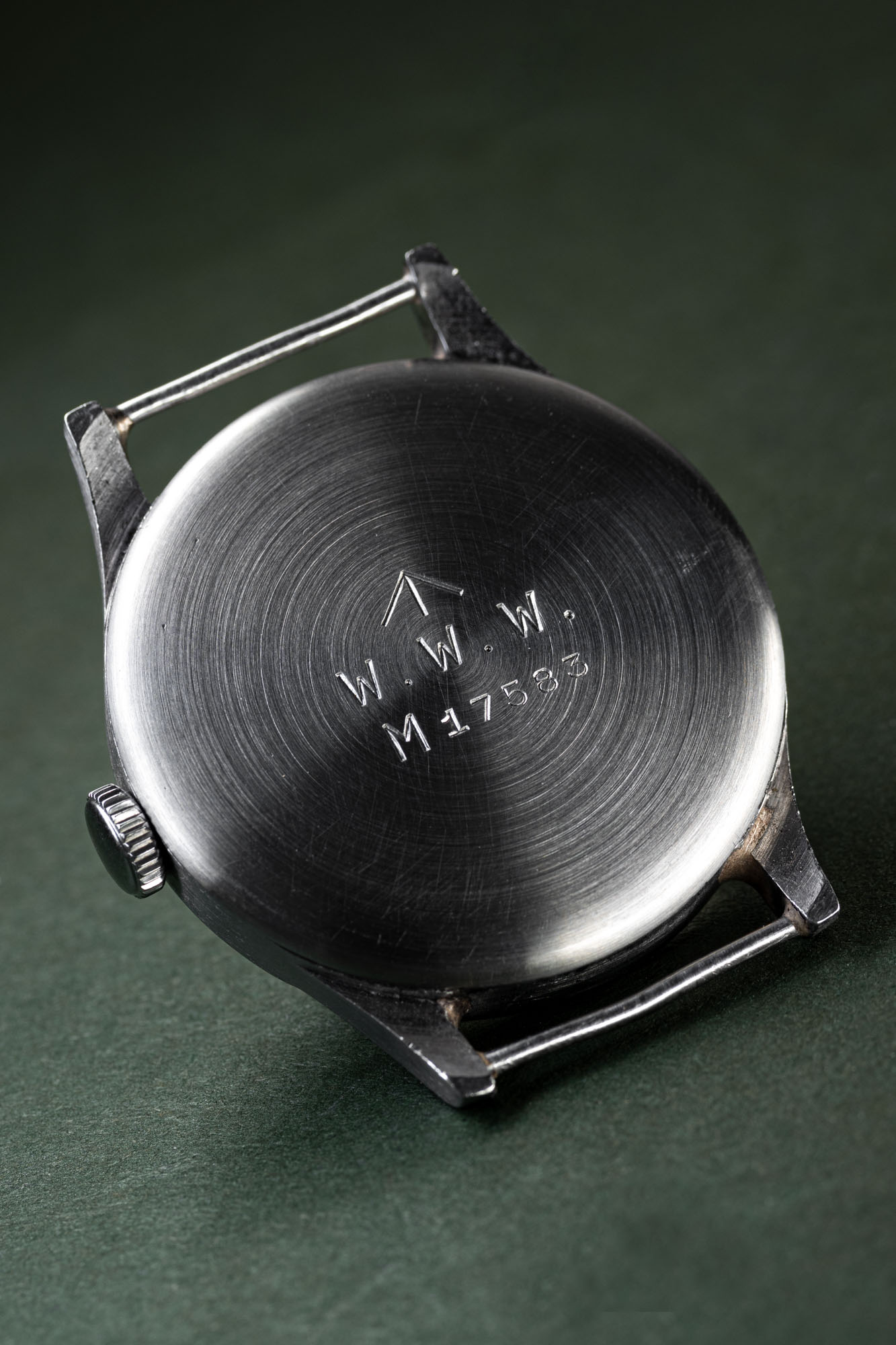 Most of us know this war movie with celebrities such as Charles Bronson, Telly Savalas, and Donald Sutherland. Now we are no film critics, but wow what a bunch of men! This movie is a reference to the nickname of this military watch.

Towards the end of World War II, the British army commissioned 12 (actually 13) watch brands to make a watch for the British troops. These were Buren, Cyma, Eterna, Grana, Jaeger Lecoultre, Lemania, Longines, IWC, Omega, Record, Timor, and Vertex. Enicar was also asked, but it never delivered. The watch must meet a number of conditions: Black dial, waterproof, subsecond, luminous hands/index, and plastic glass.

So to speak, the watch brands went to work. There were 12 military watches on the market with some minor differences. The type of hands could differ or the material the case was made of. But all met the requirements of the British army. Because 12 brands made a watch, collectors say, Dirty Dozen, if you have the whole set.

This is the IWC MK X version of the Dirty Dozen, of which 6.000 were produced. Needless to say, many of them were lost as these military watches are really not babied as dress watches would be. Of course, all the familiar military numbers are present on the case back.

Condition is still quite important on these pieces, and this piece is a really good one. The dial is spotless and a real beauty. Yes, the radium has become a little blurry, however, this is normal. It’s still very much in the right place and hasn’t damaged the dial paint. Furthermore, the watch case really has maintained its original edges and curves, suggesting it hasn’t been ‘used’ a lot when it was in military service.

Dirty Dozen IWC’s are becoming rarer every day, finding one in this condition is something special. Feel free to contact us for more information! available now.

International Watch Company, better known as IWC Schaffhausen, was founded by American watchmaker Florentine Ariosto Jones in 1868. The company specialized in Aviation watches and is currently operating under the Richemont Group umbrella.

IWC introduced its first pilot’s watch in 1936. An inner rotating pointer could be used to keep track of take-off times and the escapement was anti-magnetic, to cope with the magnetic fields from the cockpit instruments.

In 1939, two Portuguese distributors ordered a large wristwatch with pocket watch movement and another iconic IWC line was born: the Portugieser. Today, particularly the dressy Portugieser chronographs are popular among IWC aficionados.

When Europe plummets into WWII, IWC is commissioned by both sides of the conflict to supply military watches. The two best-known examples are the Dirty Dozen field watches for the allies and the big pilot, known as Beobachtungsuhr or B-uhr, for the German Luftwaffe. The latter would form the design template for the later Big Pilot range.

Towards the end of WWII, IWC developed a new military movement, known as Cal. 89. When the war ends, the tough caliber is fitted to civilian watches. The Cal. 89 watches, many in classic Calatrava style, remain popular among collectors until today. In 1948, the Cal. 89 is fitted to the Pilot Mk XI, another popular vintage reference.

1955 Saw the introduction of another influential IWC model: the Ingenieur. IWC used its expertise in magnetic resistance to manufacture a watch for engineers and scientists, working with magnetic fields. This is two years after Rolex introduced the Milgauss for the same clientele.

In 1967, IWC branches out into water sports. The Aquatimer is introduced as a serious divewatch. The more casual Yacht Club is launched alongside for all-purpose daily wearing.

IWC remained innovative, being among the early adopters of the brand new quartz technology, for instance. But the house also recognized the value of heritage, building on its historic Pilot and Portugieser ranges. The result is a broad scope of all sorts of watches, for all sorts of people. Through it all, IWC maintained a reputation as high quality watchmakers.