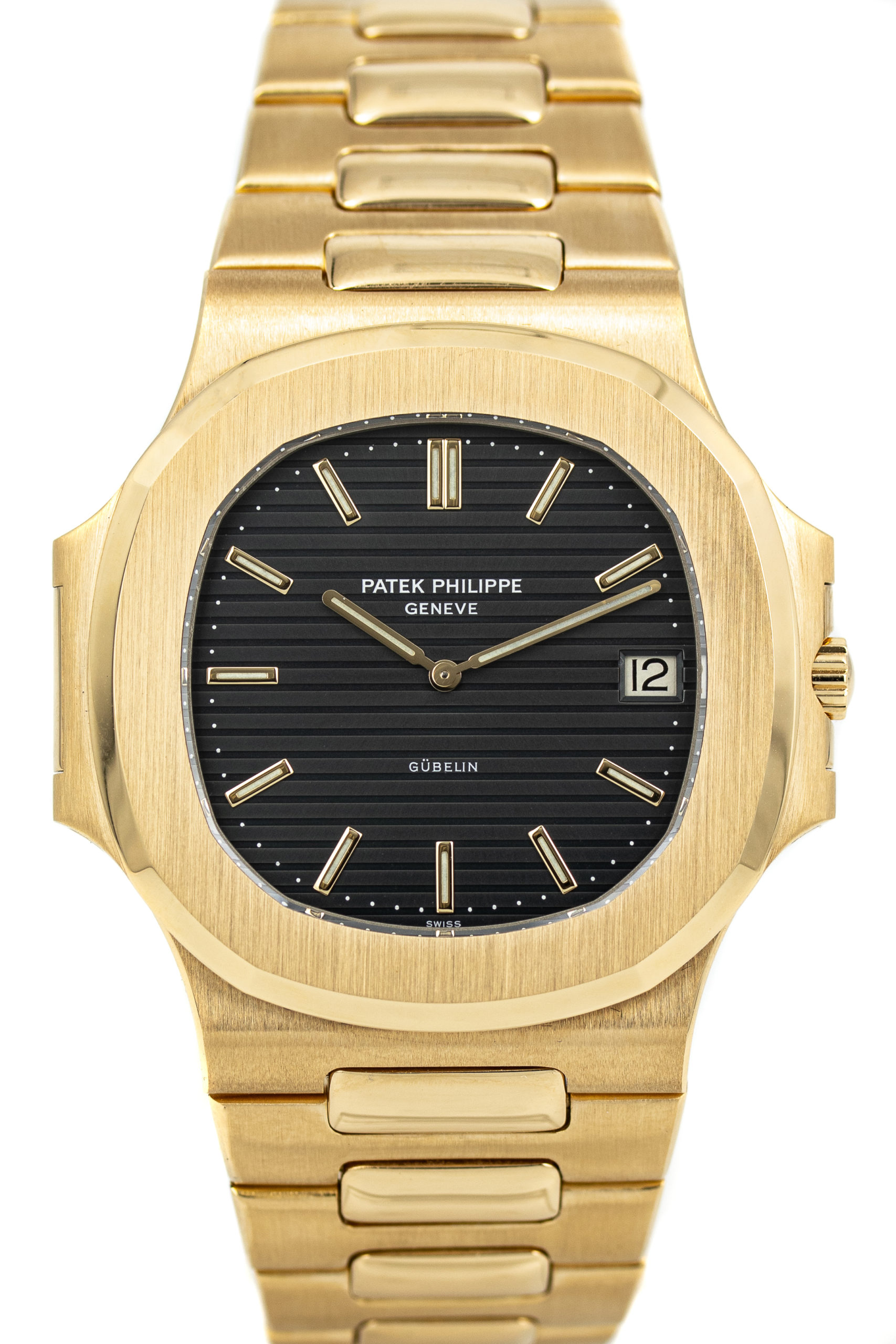 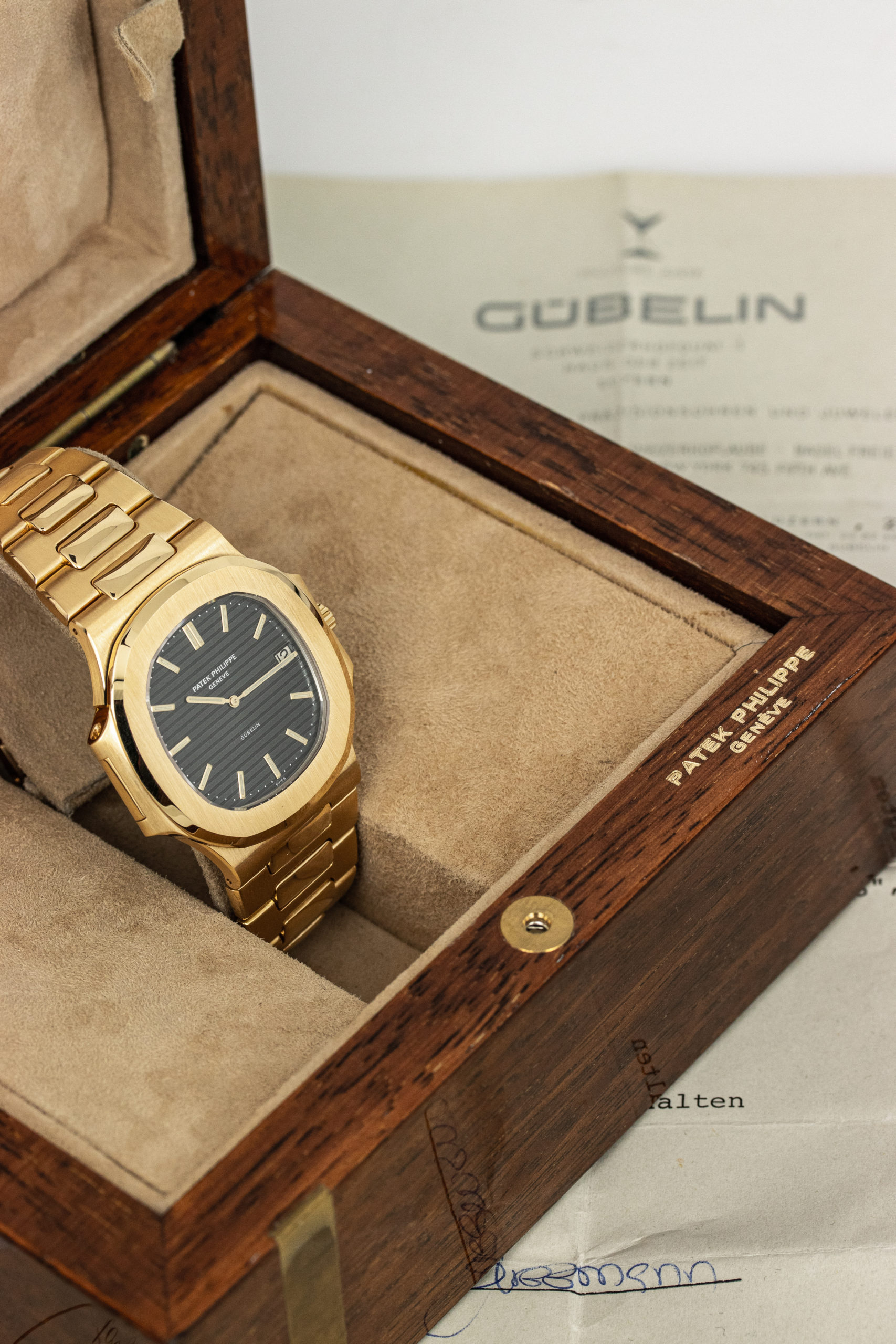 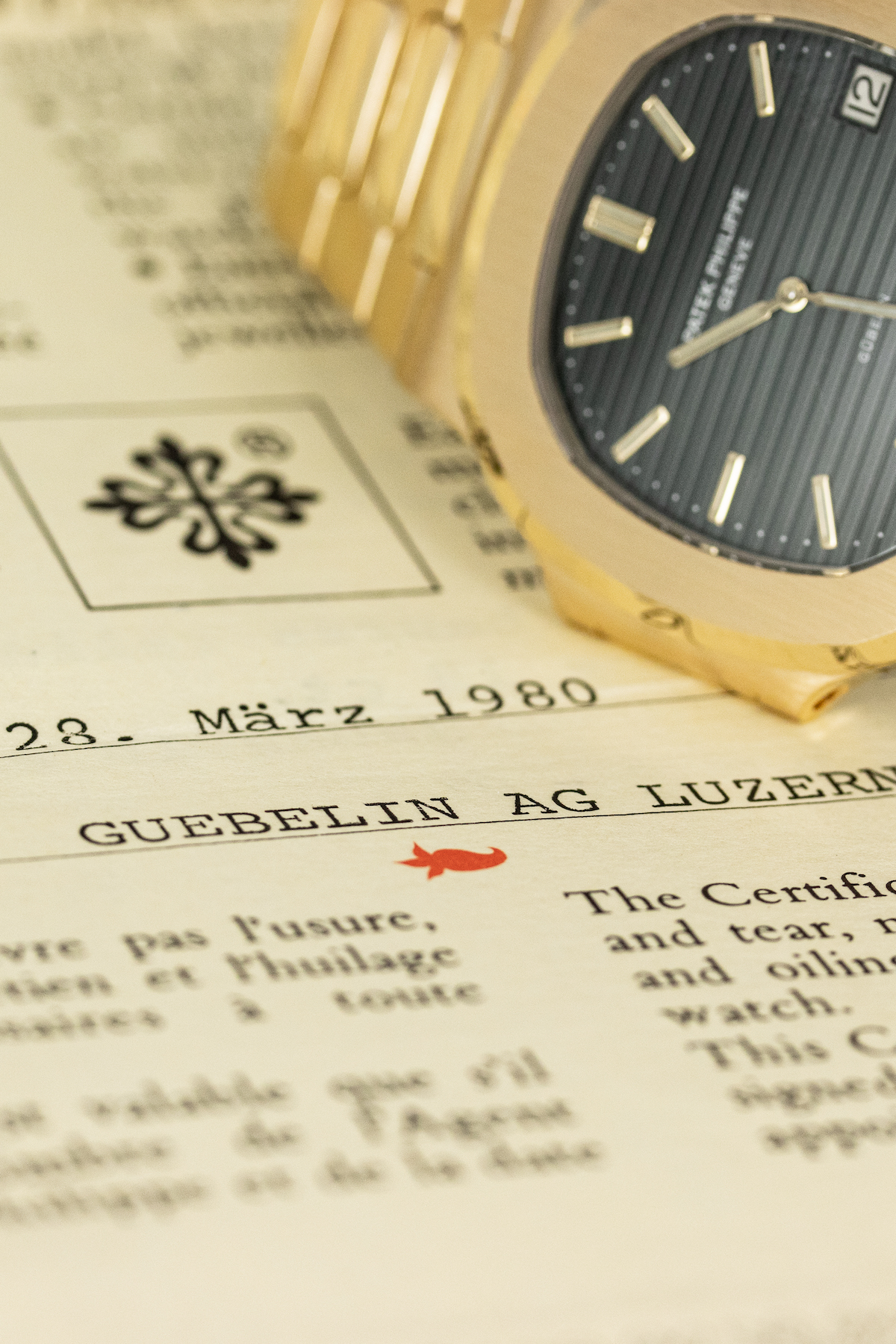 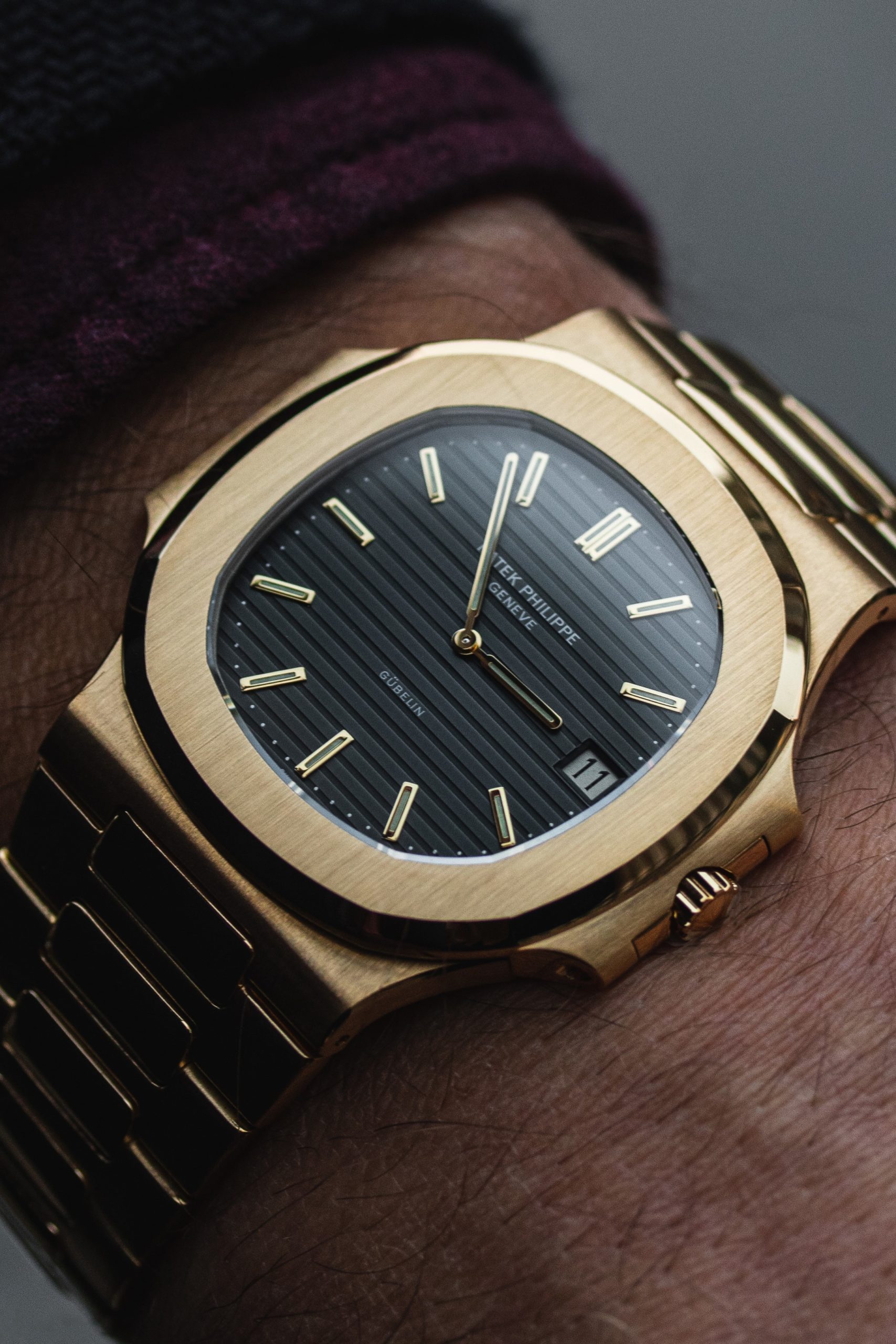 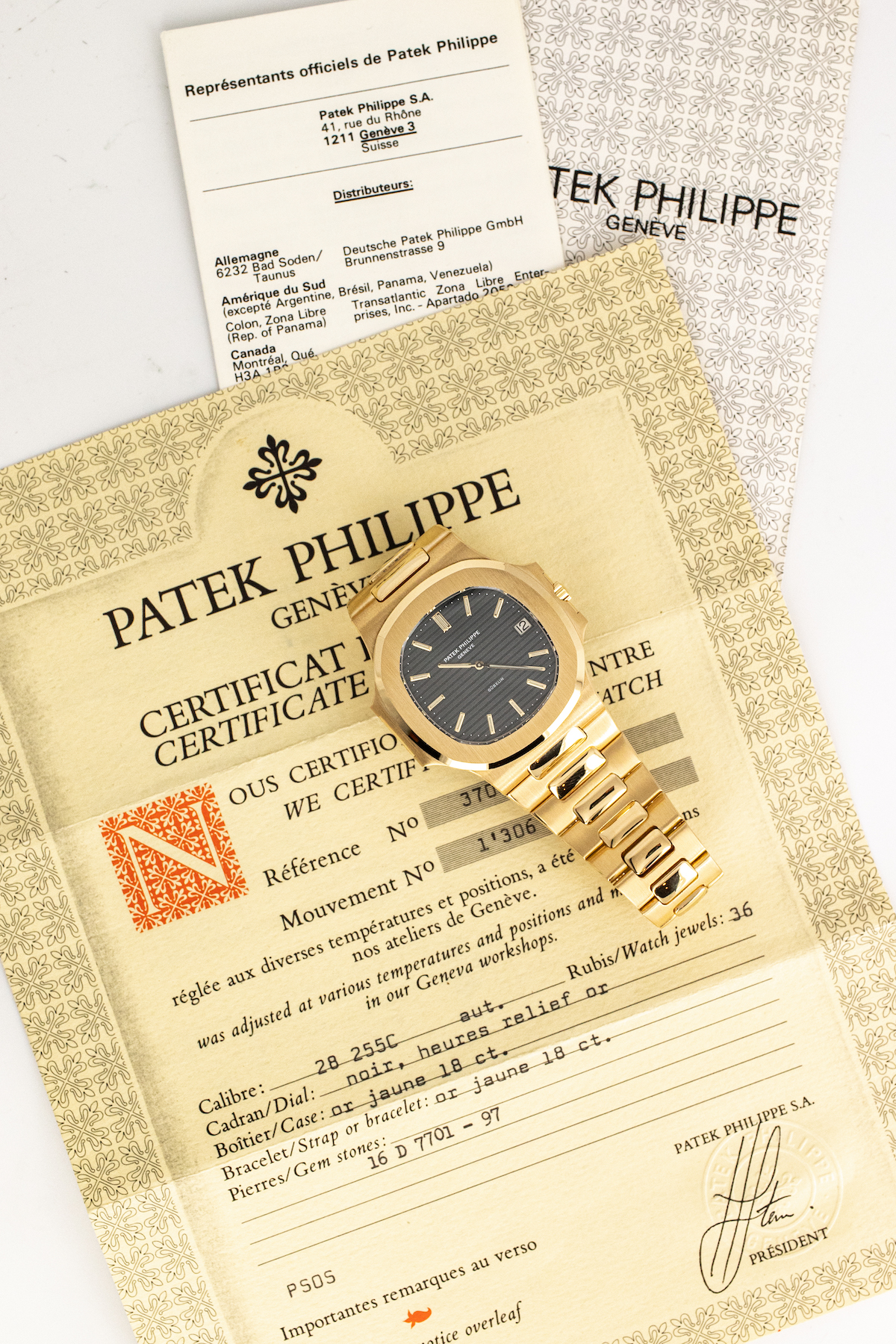 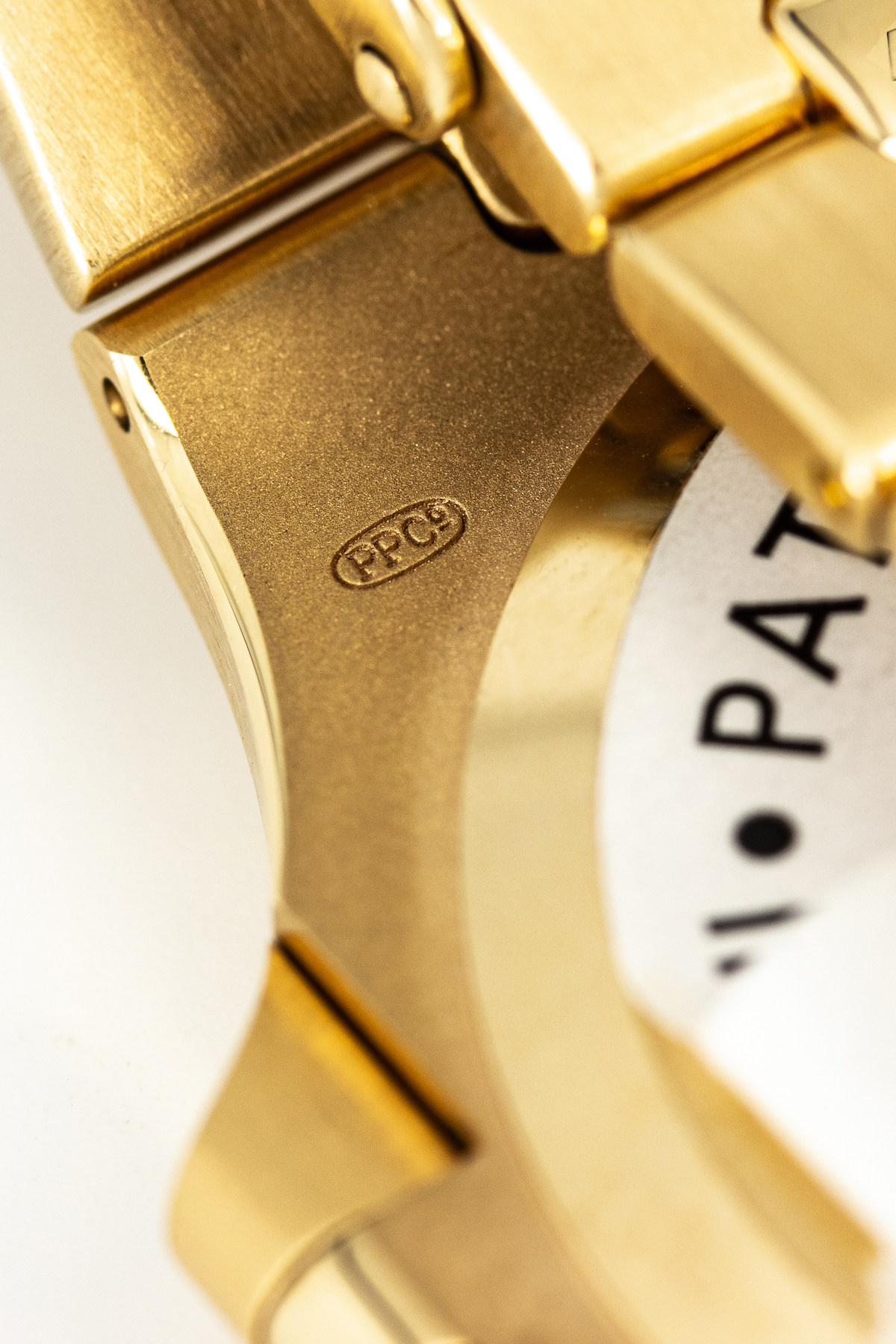 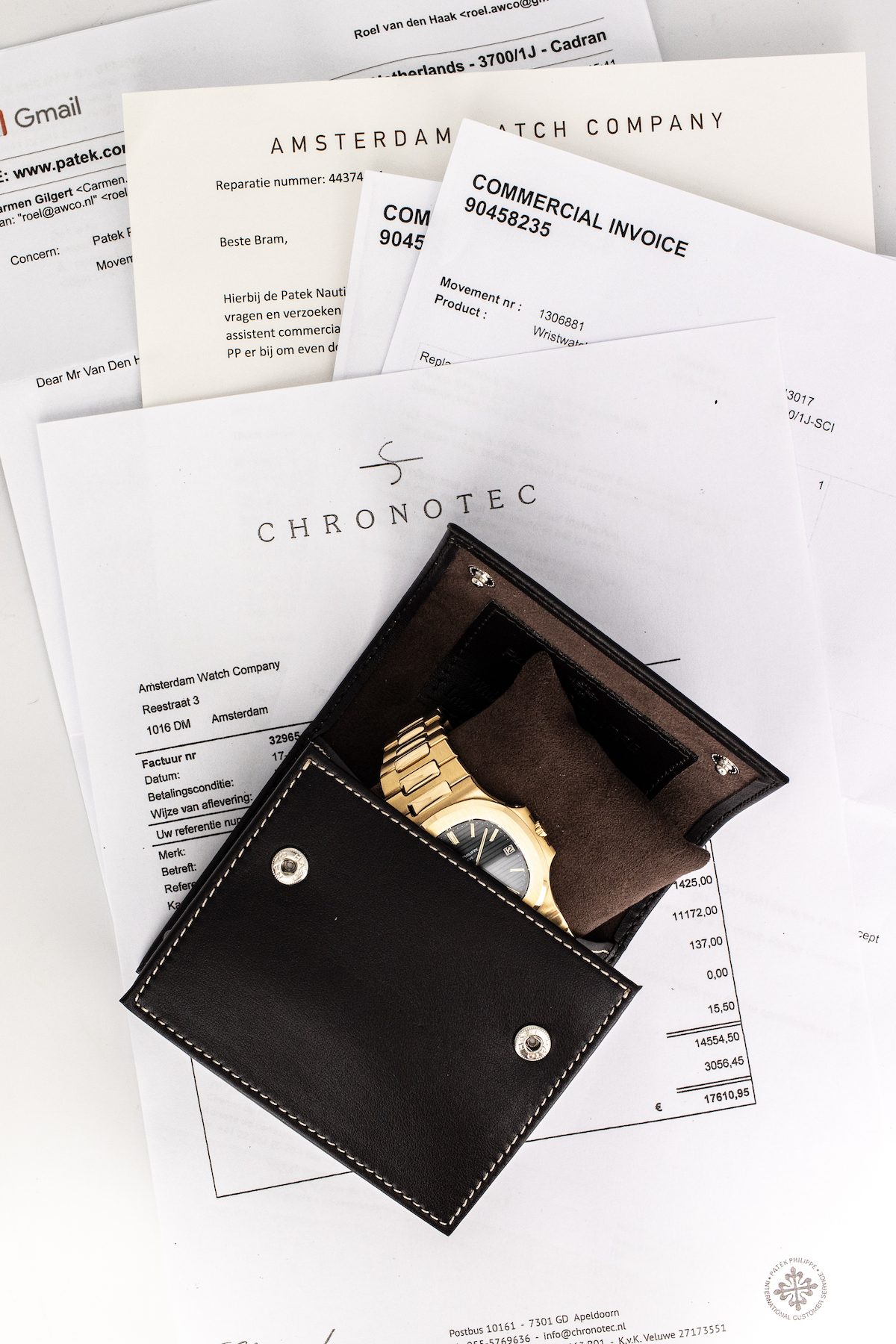 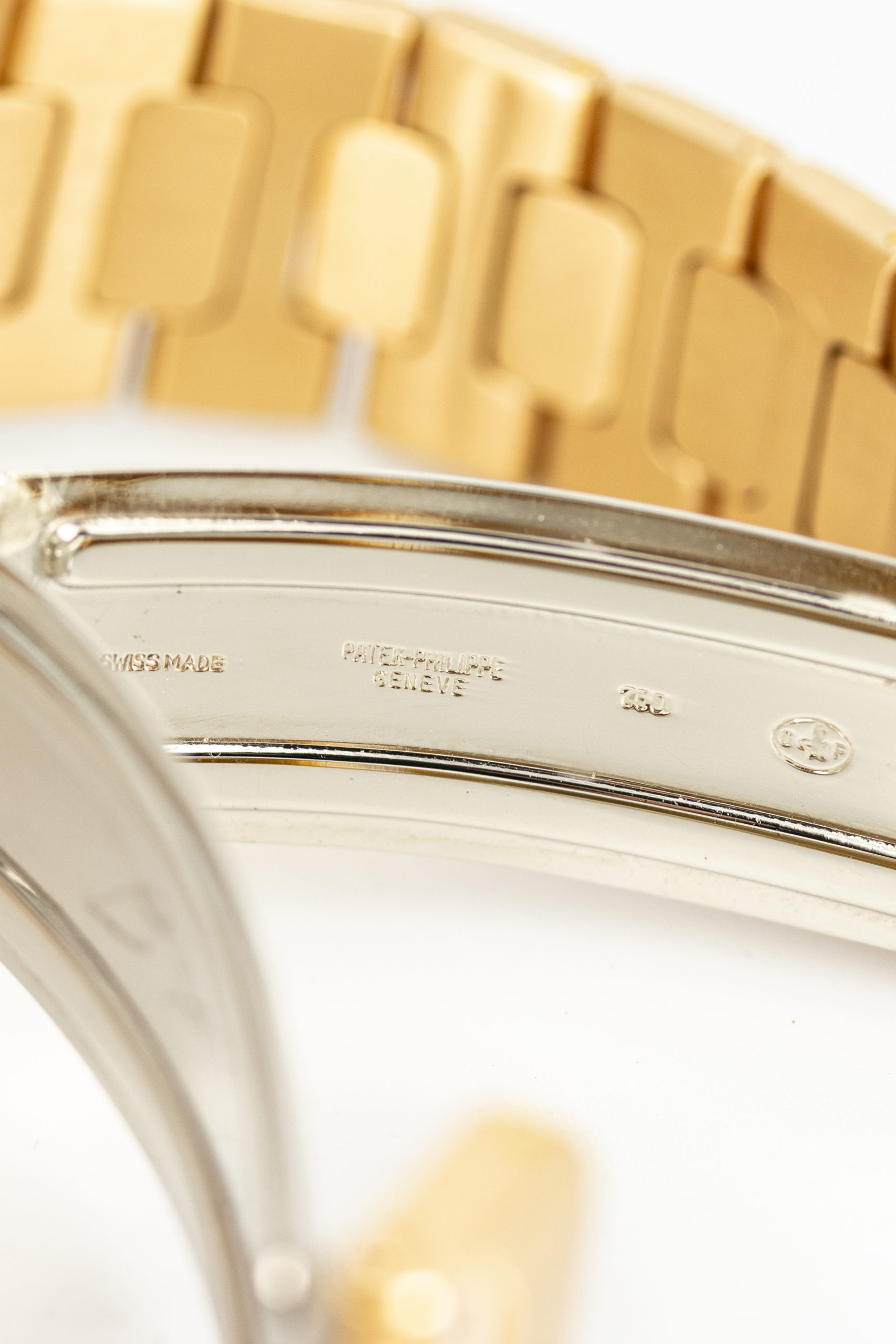 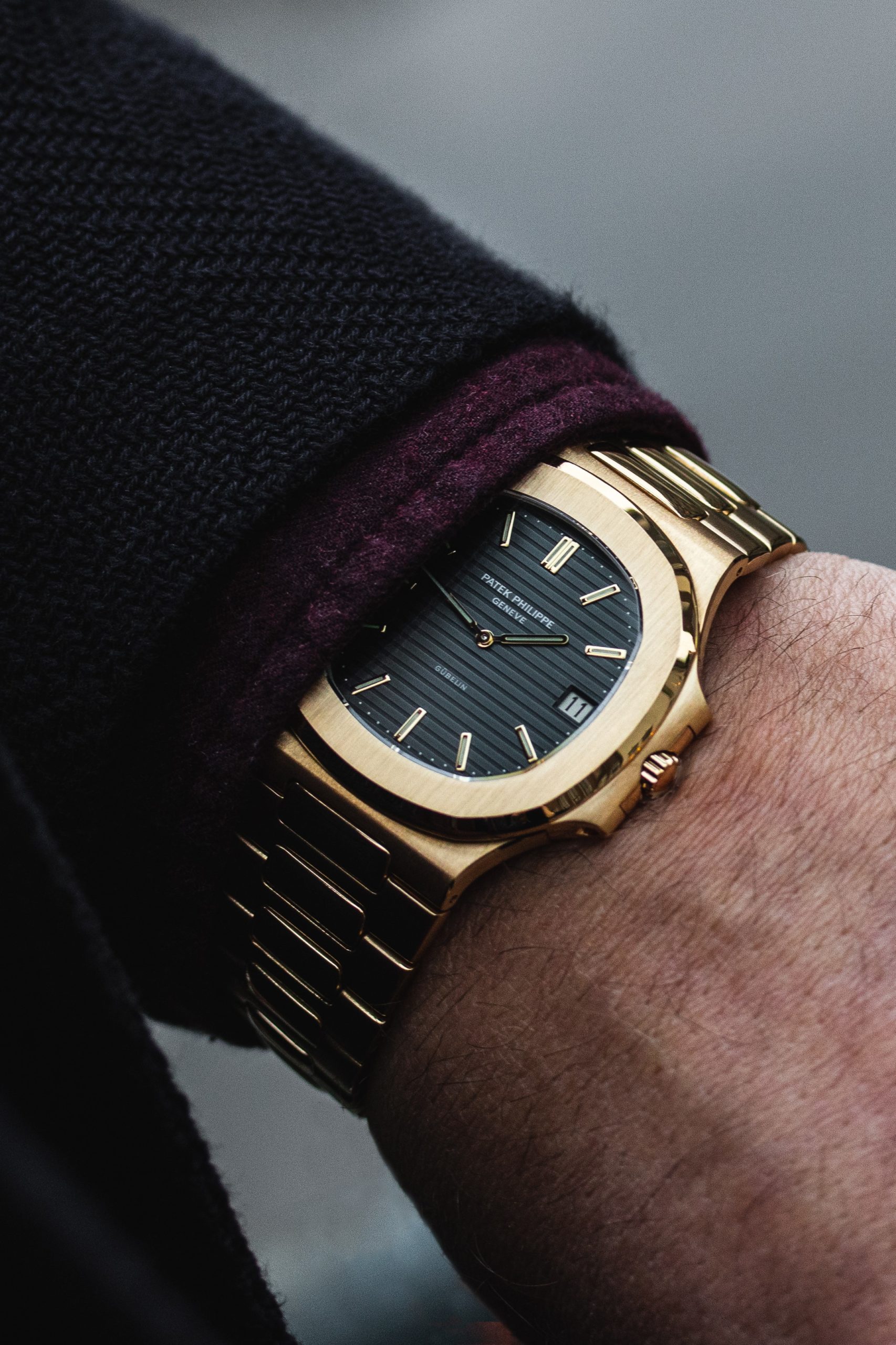 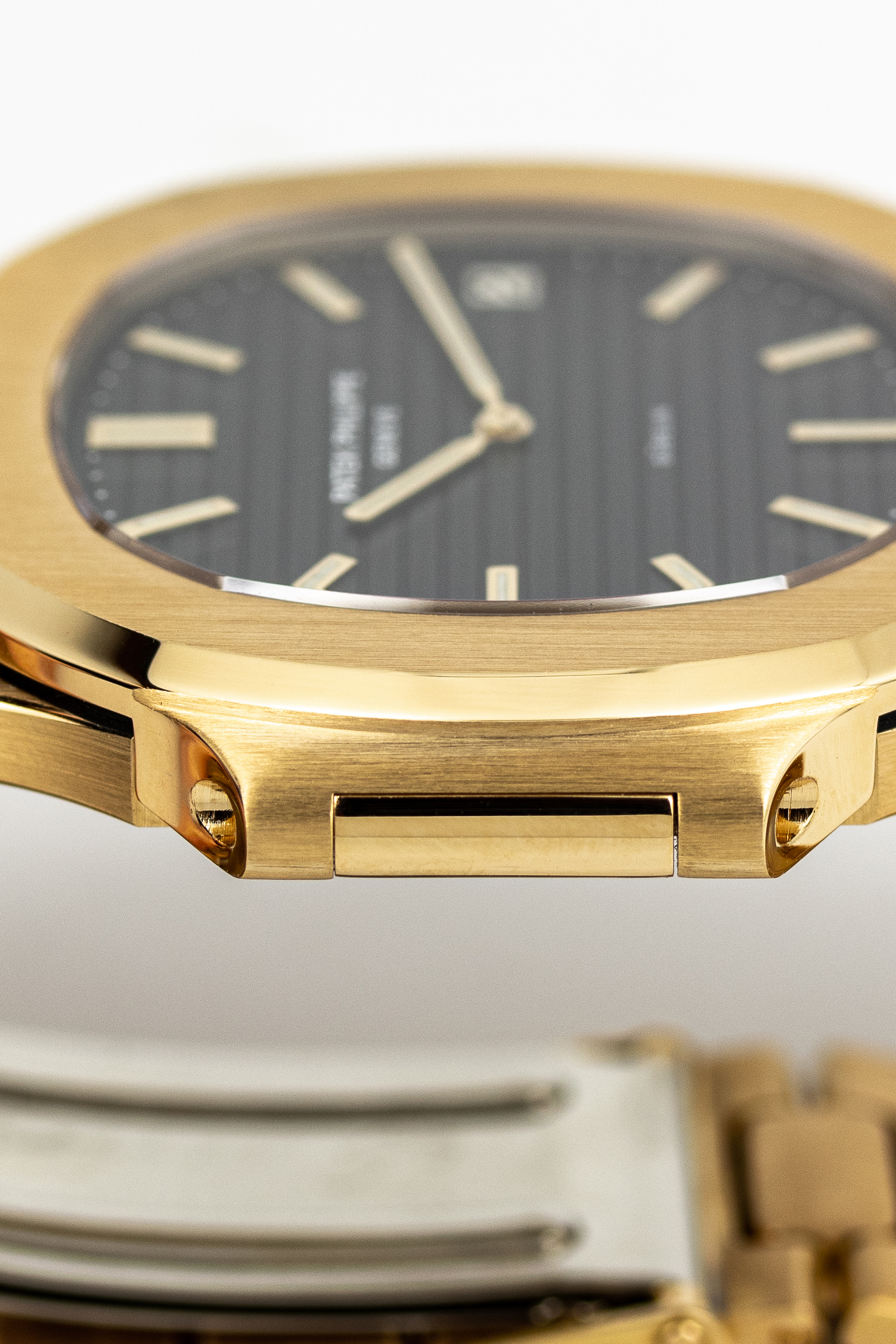 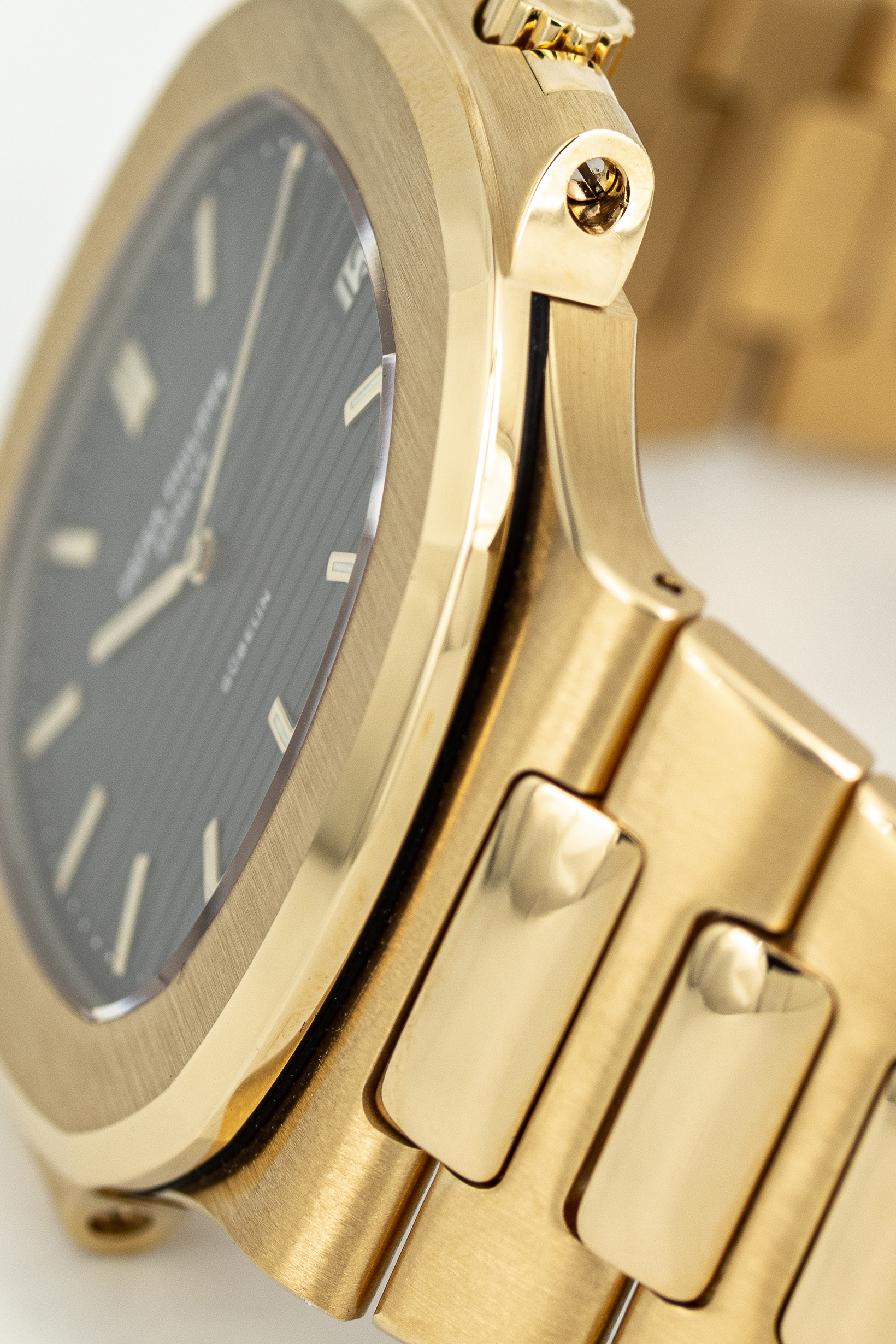 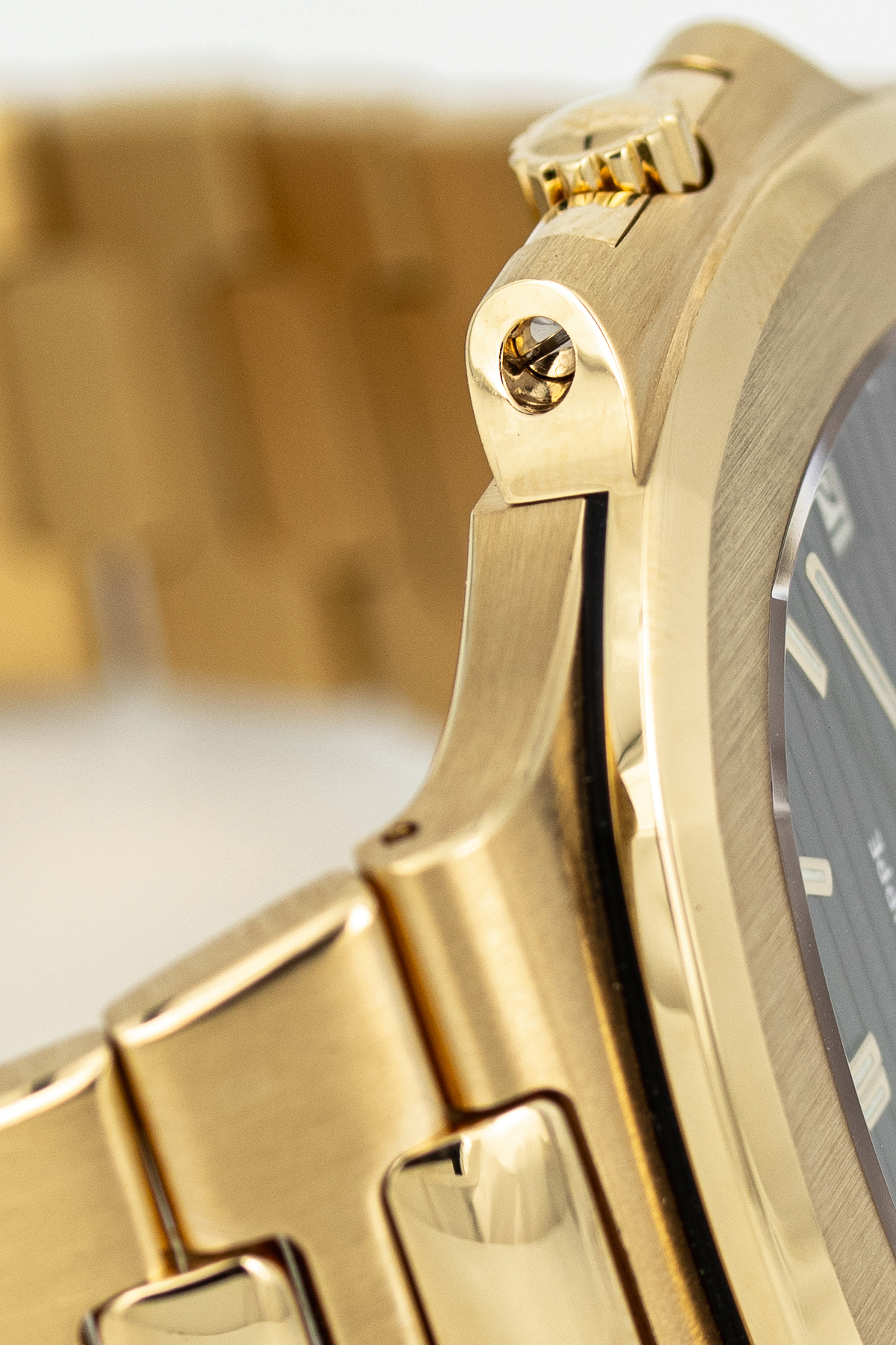 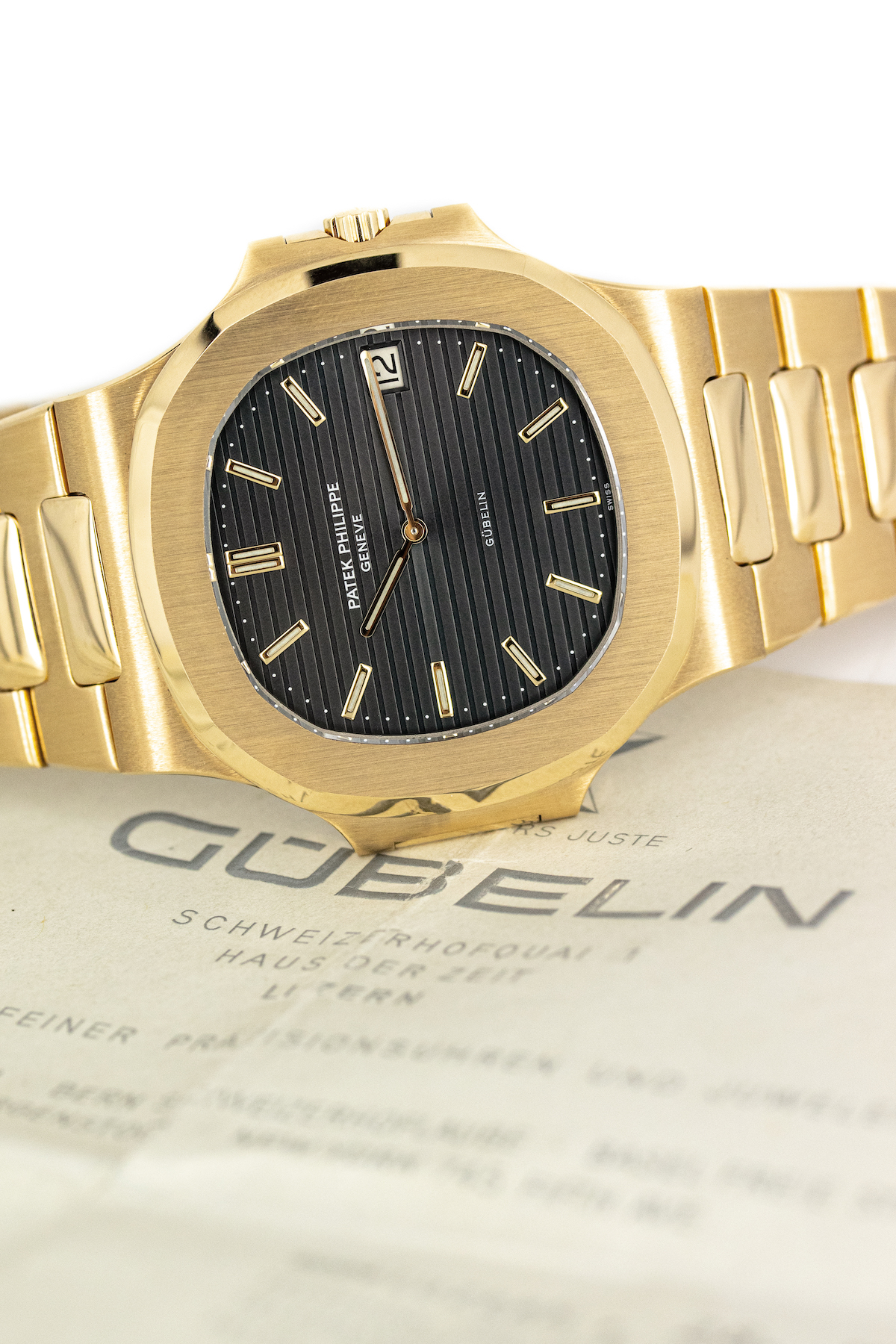 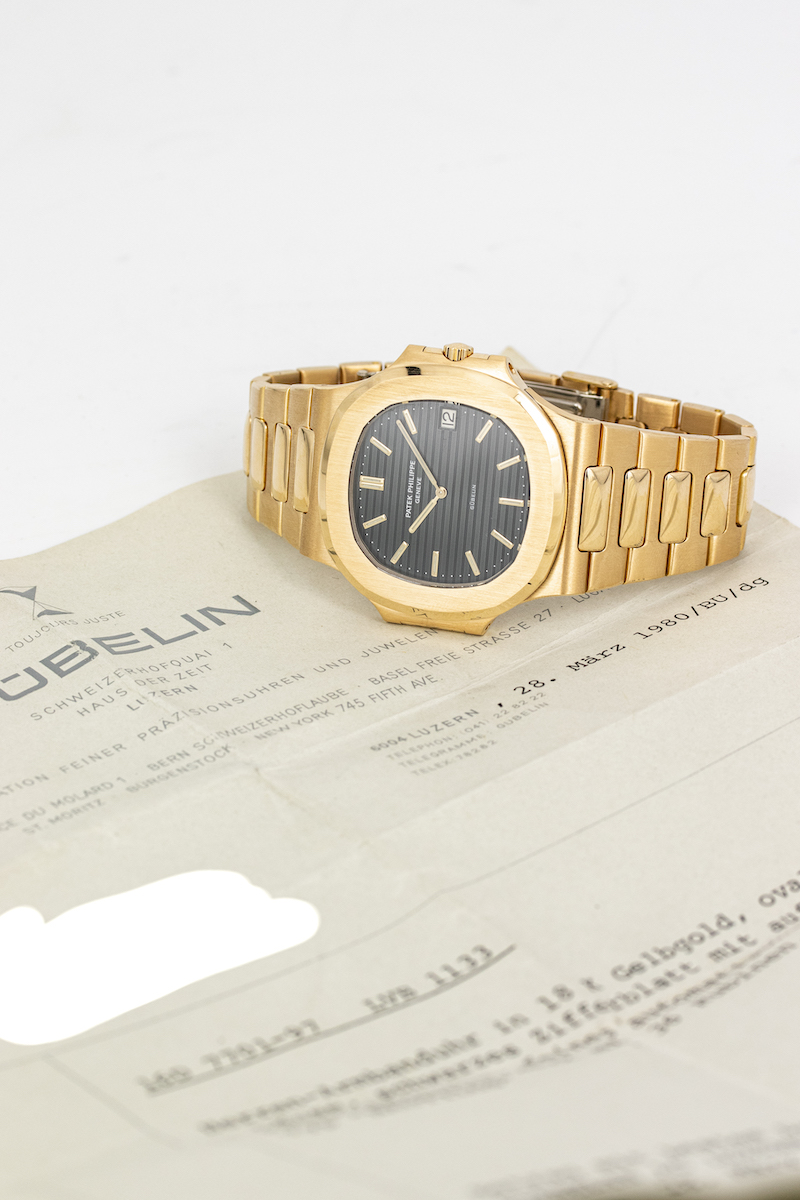 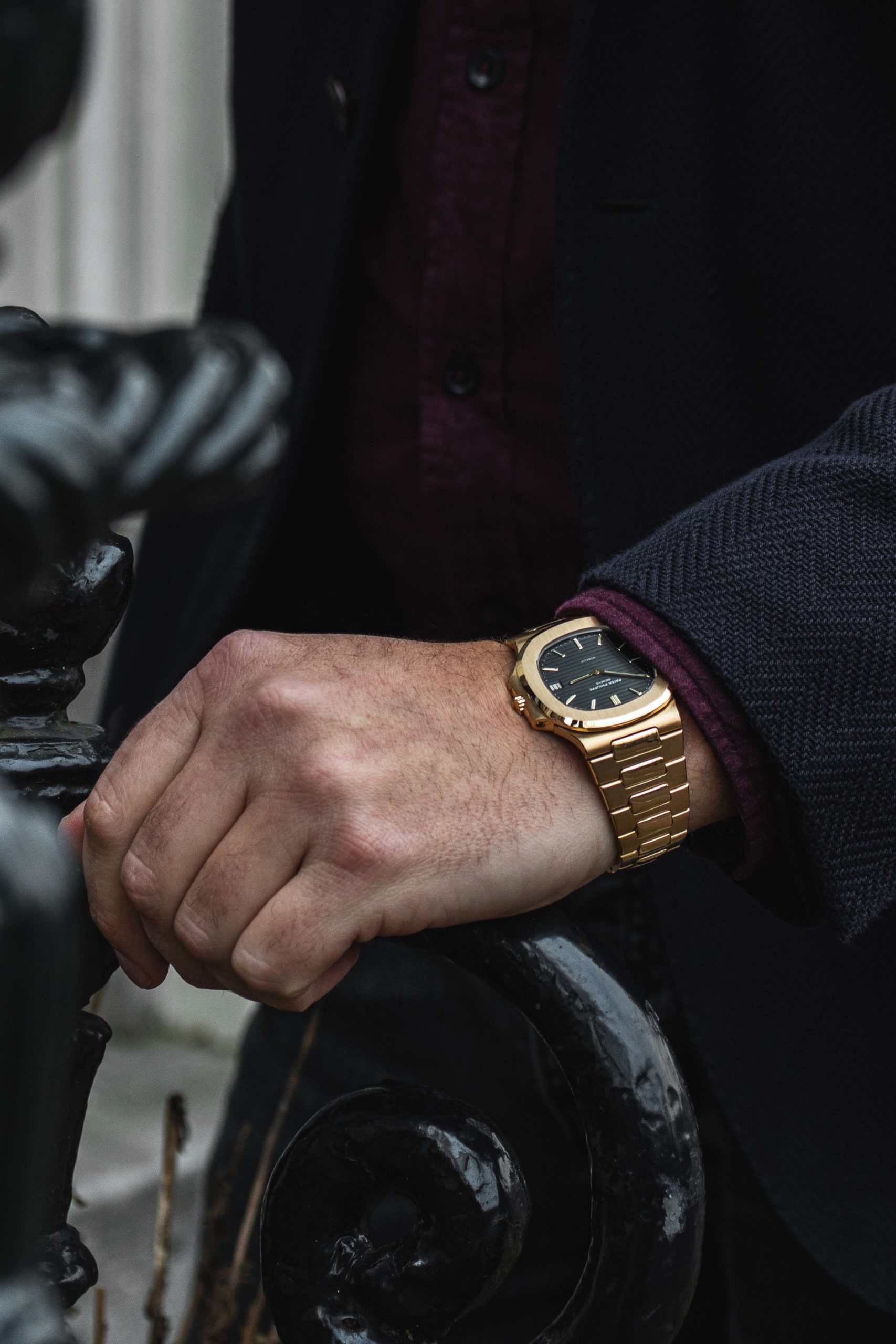 The Nautilus, named after Captain Nemo’s vessel in Jules Verne’s famous 1870 novel, 20,000 Leagues Under the Sea, had its humble beginning in 1974. It was sketched on a napkin while Gerald Genta, the world’s most iconic watch designer, was sitting in a restaurant enjoying his lunch and overheard on a group of Patek Philippe executives chatting about the Basel Watch Fair at a table positioned close to his.

While the first-ever Nautilus, the ref. 3700/1A was in production from 1976 all the way until 1990 in stainless steel, throughout these years different new models were introduced in new materials. The one you see here is from the very first series made entirely out of 18k gold with the dial specially made for Gübelin, a famous jeweler based in Lucerne. Gübelin started in 1854 with a small watchmaker’s shop in Lucerne and became a respected name very fast. Throughout their history, Gübelin has always remained a family-owned business. Over the years, the House of Gübelin and the House of Patek Philippe have forged strong ties with incredibly collectible watches as a result. Currently, ONLY FIVE pieces are known from this first 18k. Nautilus generation with a Gübelin signed dial.

In the first 5 years of production, the bracelet of the 3700 was heavier and the links wider down towards the clasp. Largely due to the increase in the cost of gold over time, the bracelet was changed; the links were manufactured more narrow and the entire piece became lighter. Gold is a relatively soft metal and these bracelets were prone to developing ‘stretch’ (signs of wear on the links). Sometimes the worn off wider bracelets were even replaced during service for the newer type of bracelet. Therefore we’re very pleased to have this Jumbo Nautilus with its original wide bracelet which is in incredible condition with all links present.

Equipped with the 28.255 C, the Nautilus has a very reliable and accurate movement adjusted to heat, cold, isochronism and 5 positions. The demand for Patek’s exclusive watches has exploded over the last years with prices skyrocketing on auctions and the free market. The beauty and the rarity of this watch give you a feeling you won’t experience too often. Can you think of a more impressive watch from 1980 with as much potential as this Patek?

This Patek is a proud product of the two master houses from 1980, a Nautilus ref. 3700/001 Gübelin signed. Sold 28-3-1980. We have sent it to Patek Philippe for a full service, during which the full case and bezel were replaced, with original case numbers re-stamped. The dial was replaced with the original Gübelin marking, signed by Patek Philippe themselves. A rarity, as normally a service dial would no longer feature the retailer’s signature, even though it would be present originally. In short: the watch has been brought back to new condition by the people who originally built it. A full condition report and 2020 Patek service papers of the restoration above are, of course,  provided with the watch.

We can keep writing about the uniqueness of this watch; its mint condition, that it concerns a full set, signed Gübelin dial, and so on. But the pictures say more than a thousand words! Now in our store at Reestraat 3.