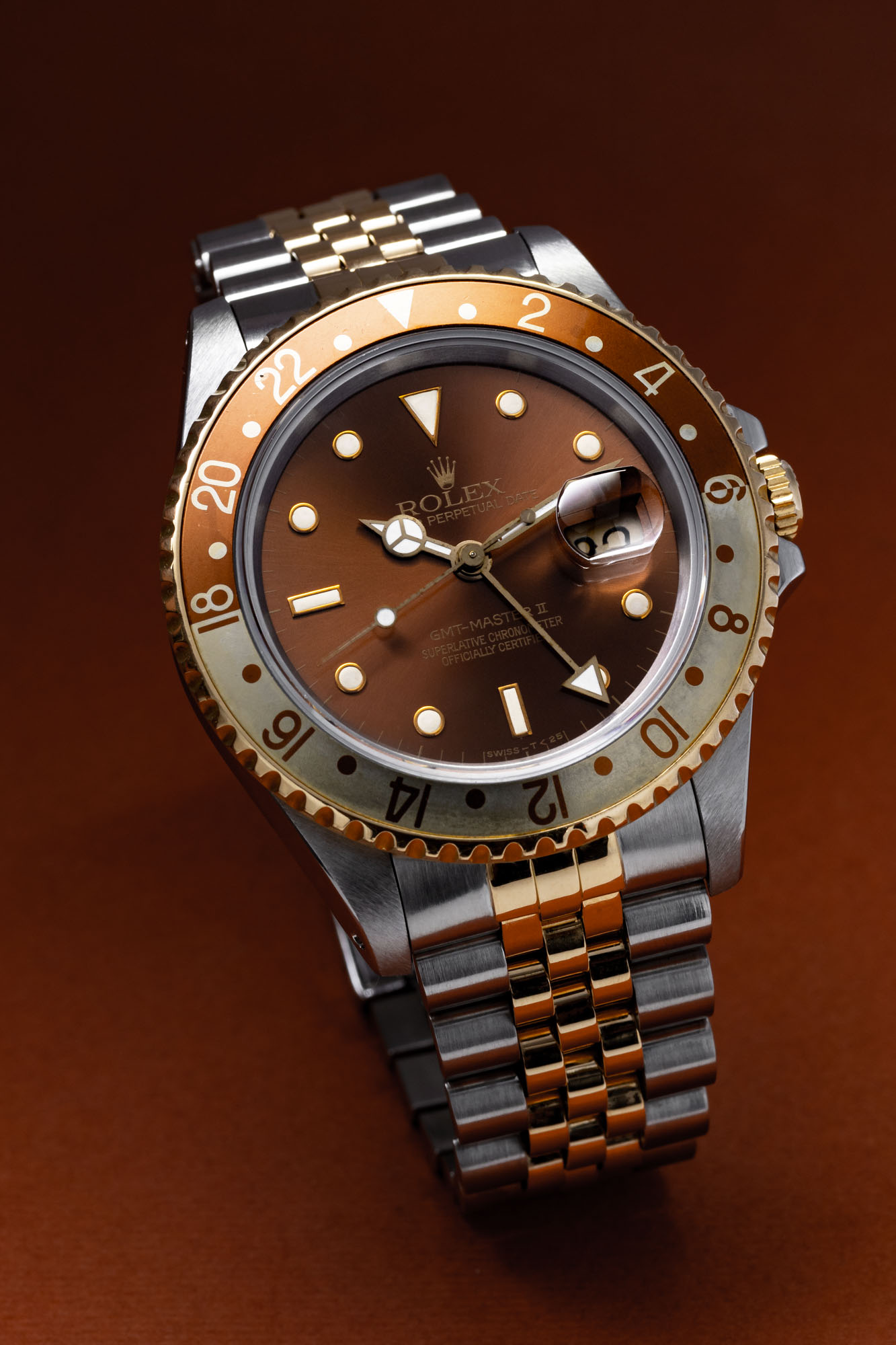 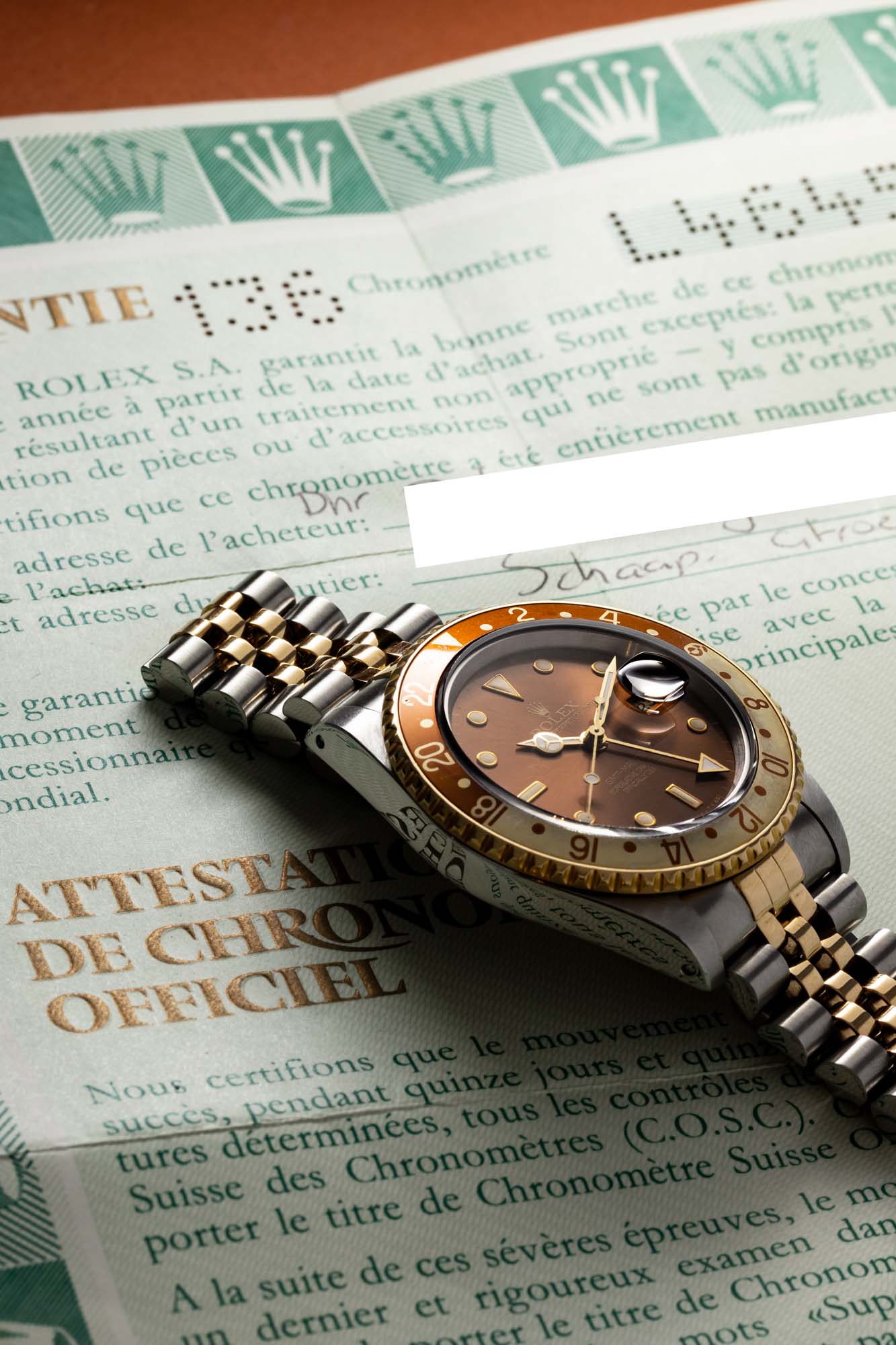 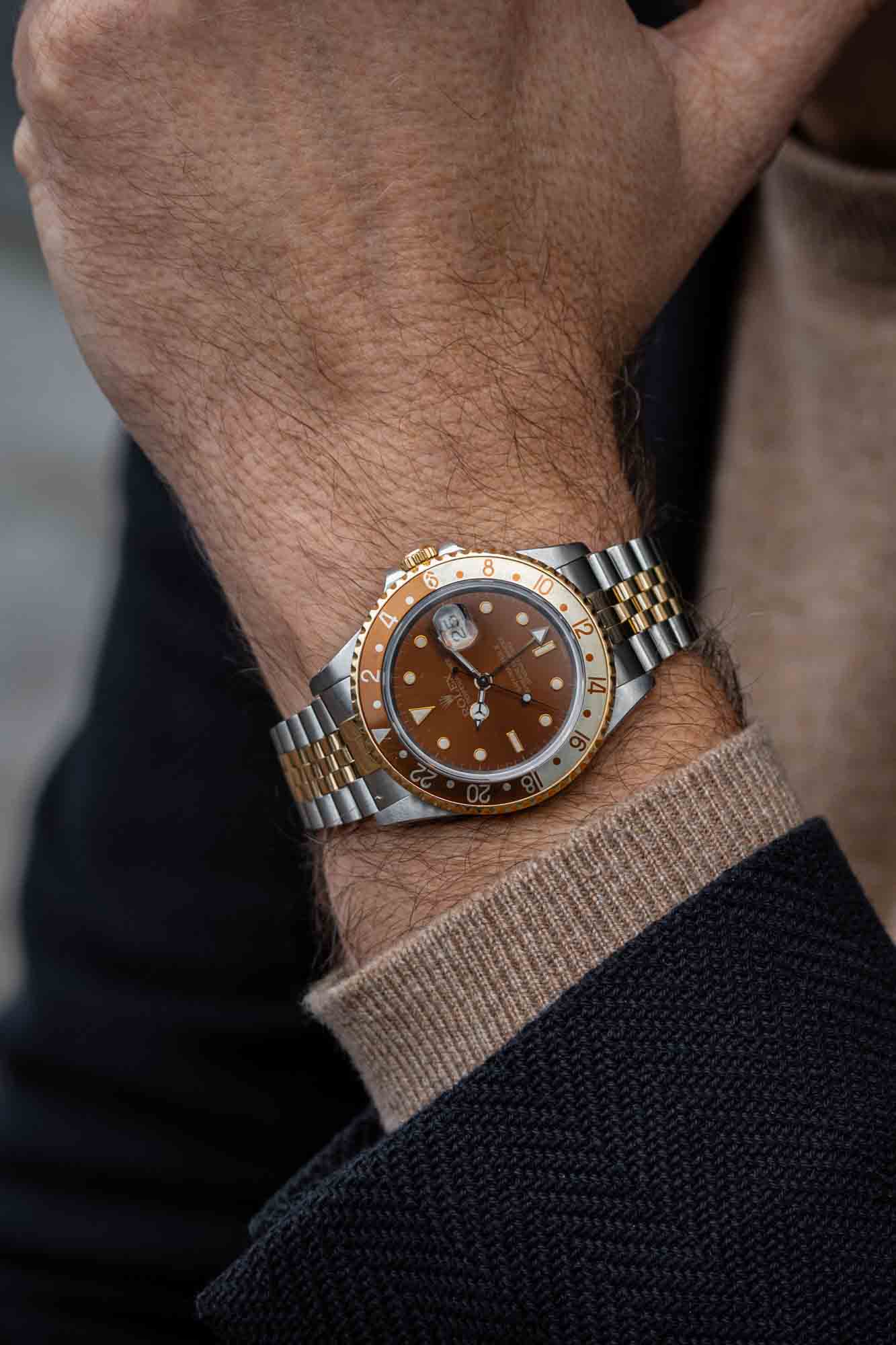 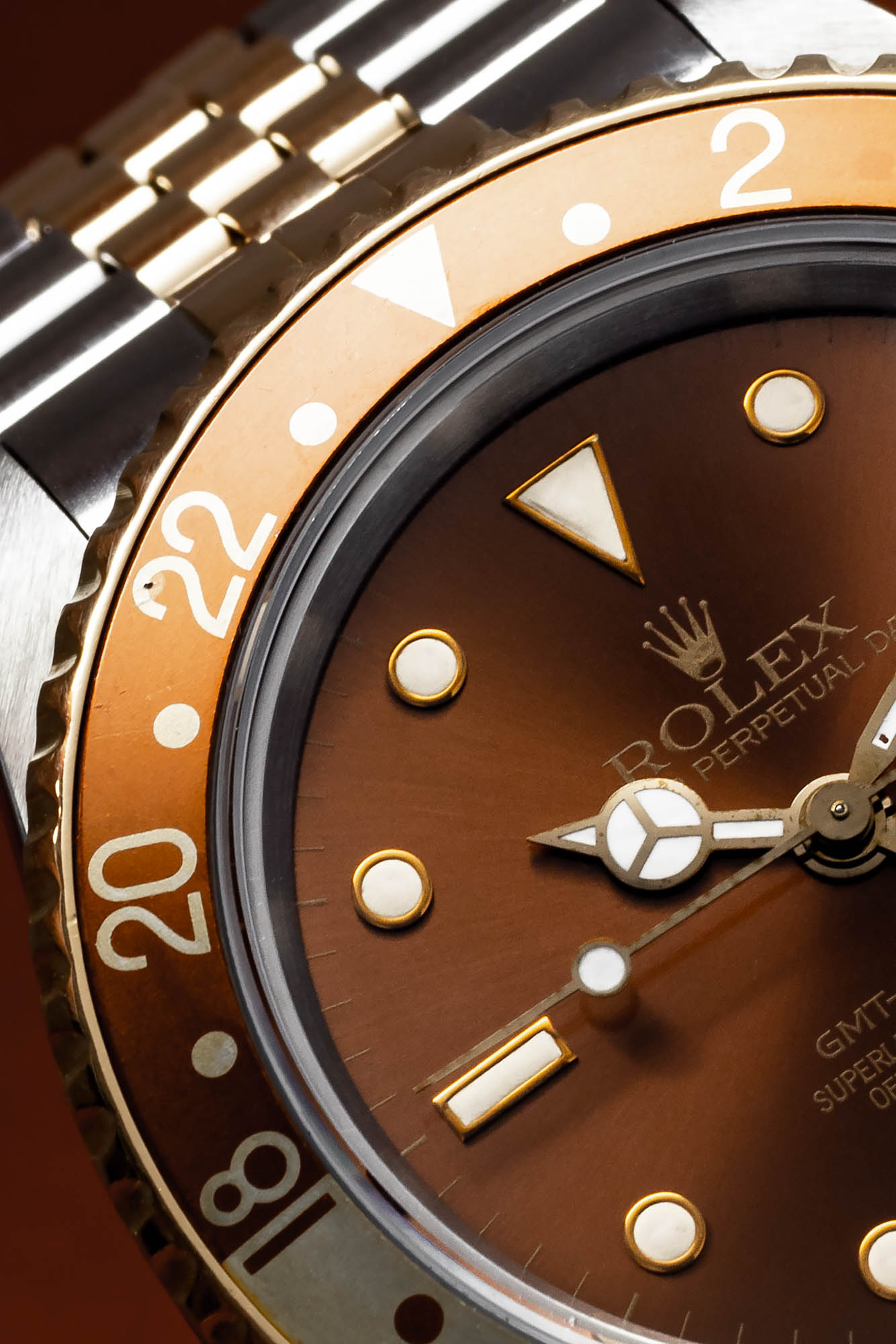 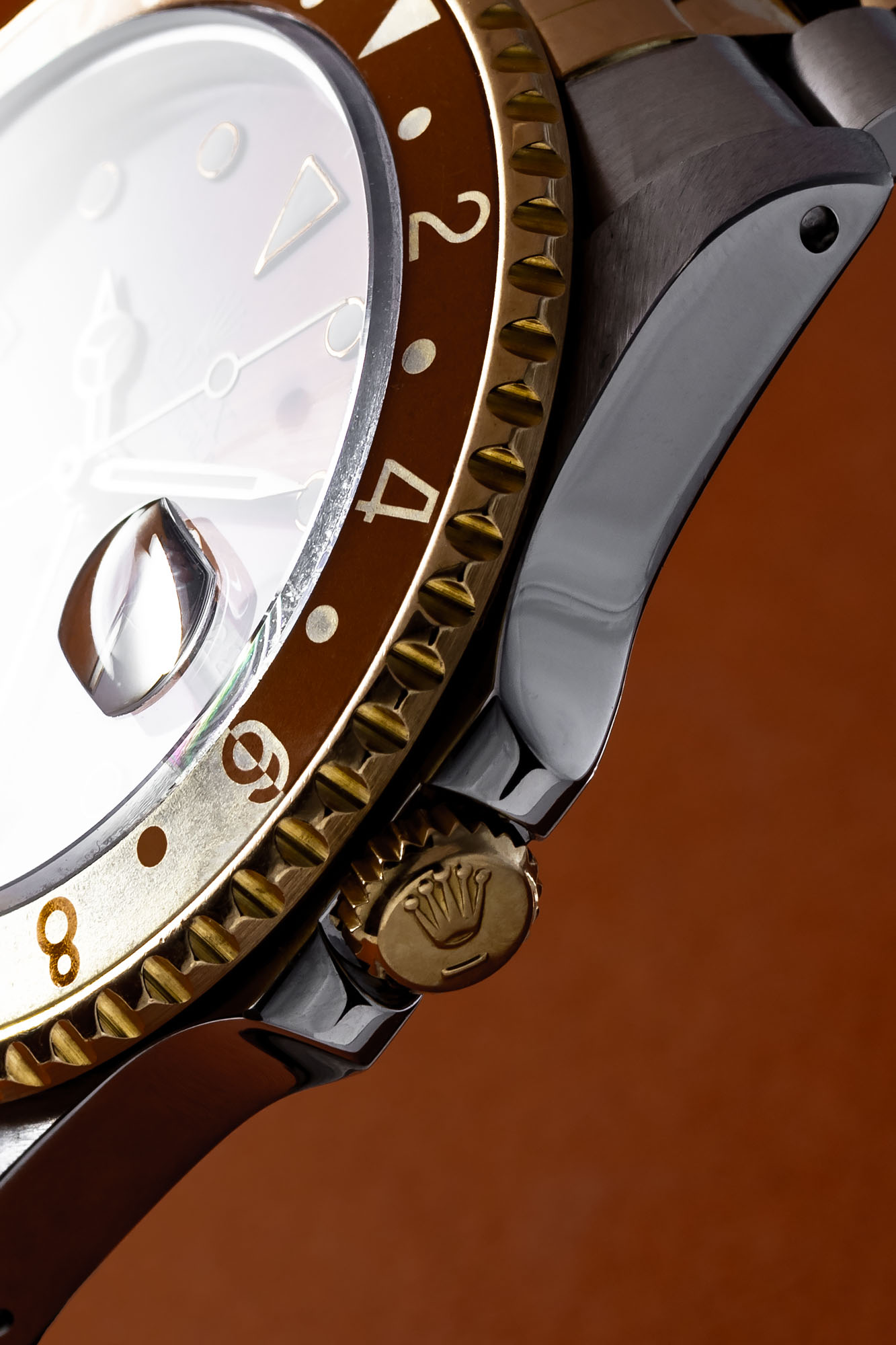 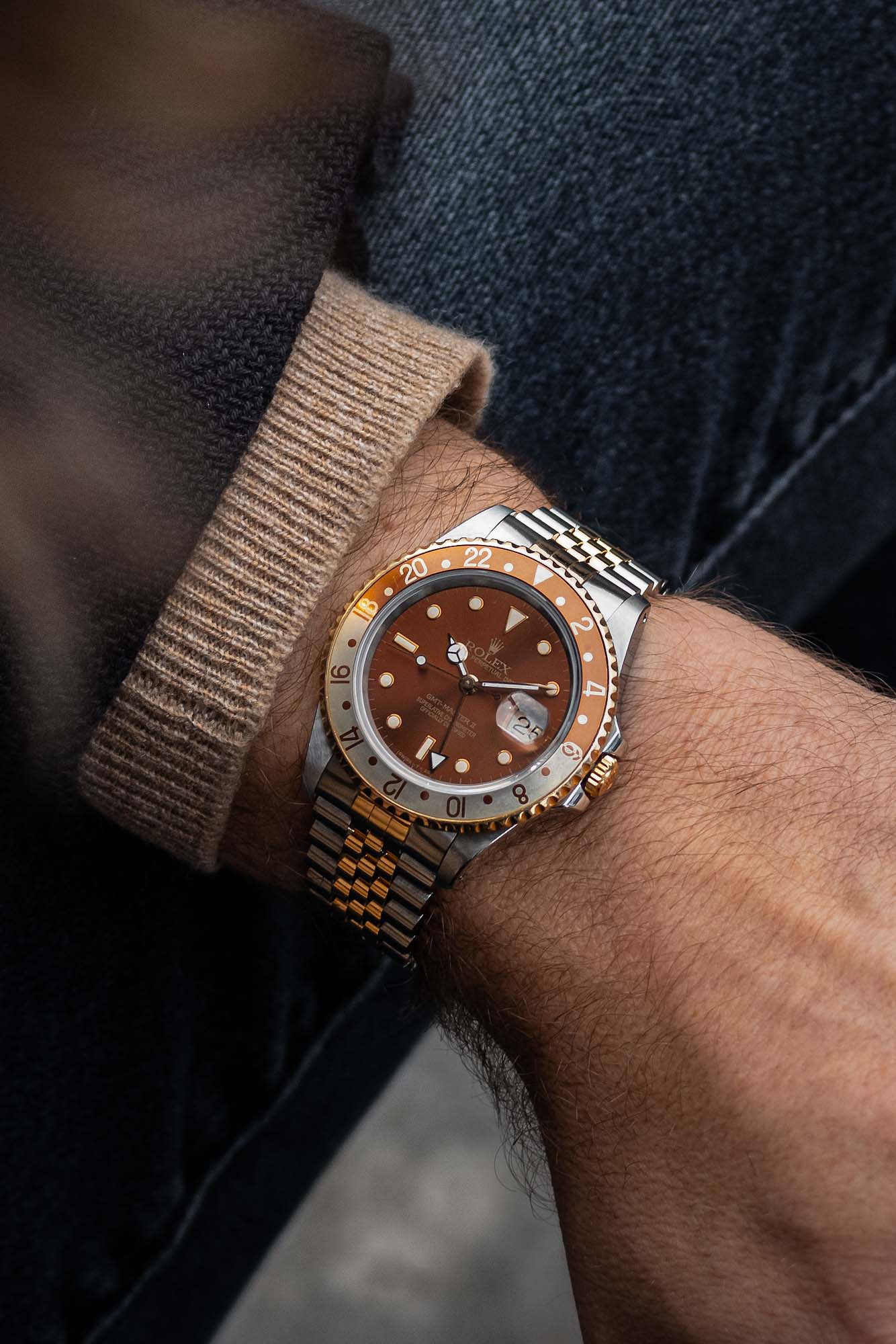 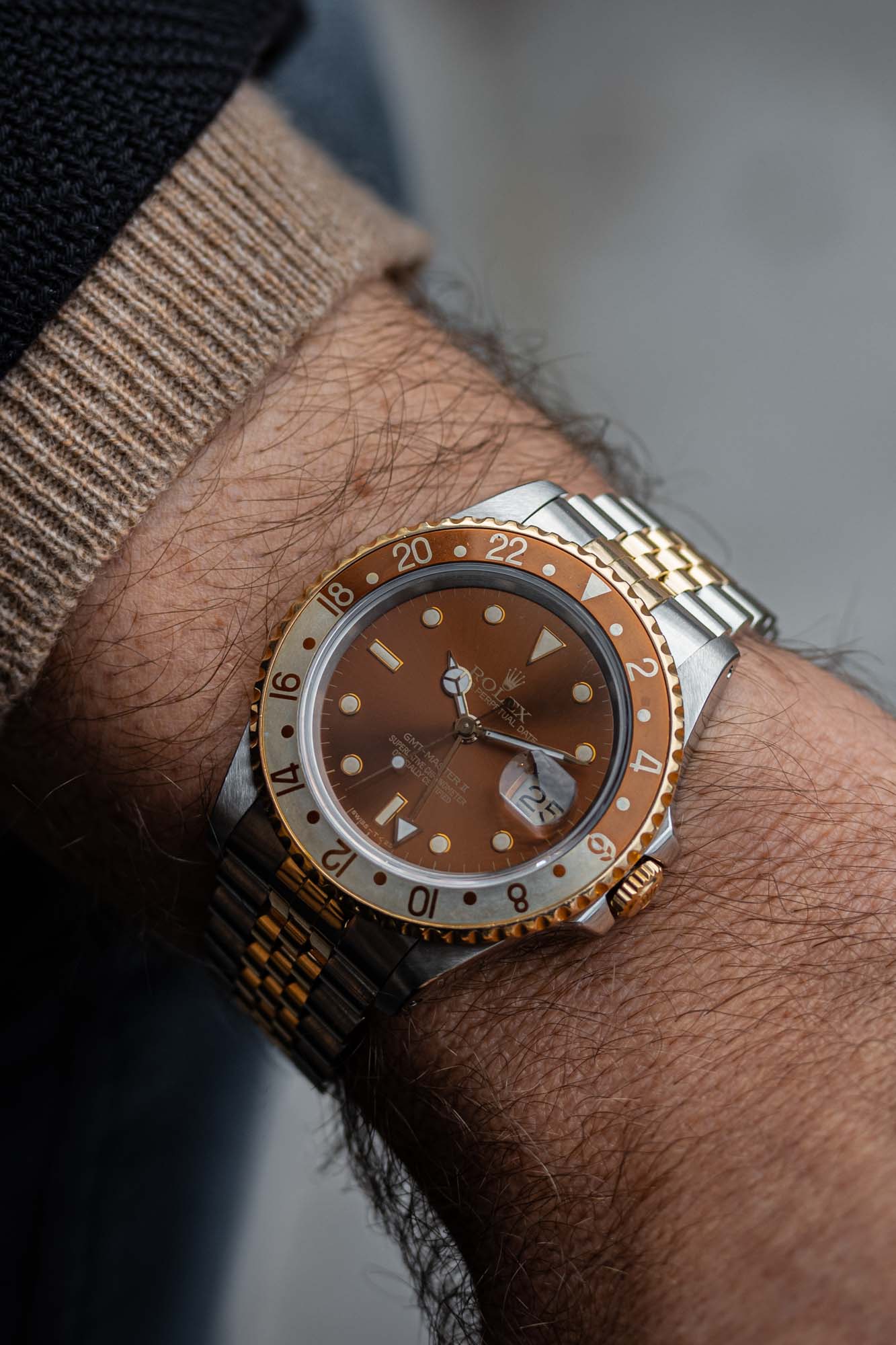 The Rolex GMT-Master was developed to meet the specific needs of airline pilots. It became the official watch of several airlines, among them the famous Pan American World Airways, better known as Pan Am. Its most distinguishing visual feature was the two-tone bezel which marked daytime from night-time hours.

The popularity of the GMT Root Beer has grown considerably in the decades since its release and is no longer in production, making the two-tone Root Beer GMT 16753 an incredible find. Prior to reference 16753, the GMT Master pilot’s watch was only available in either stainless steel or yellow gold. The rootbeer bezel is distinct, utilizing a brown and cream insert. Its resemblance to the popular soda was the inspiration behind its beloved nickname. The bezel is often accompanied by a brown dial with gold accents, lending itself to a few other nicknames as well.

This specific is executed on the iconic jubilee bracelet, which is in excellent condition.

The Rolex GMT Master was developed on request by Pan-Am airways in 1954. It was the age of air travel and for the first time in history, it became common practice to routinely cross timezones. Pan-Am requested a watch for its crews, that would allow for easy referencing of the time while doing so. Rolex obliged with an adapted Turn-o-graph Ref. 6202. It got a different bezel and a fourth 24-hour hand. It was labeled GMT Master Ref. 6542.

Rolex fitted the GMT Master with a bakelite bezel insert, displaying 24 hours. A, now iconic, color-scheme of blue for the night and red for the day was introduced. The Pepsi Rolex was born. Since bakelite was prone to breaking, an aluminum bezel insert was introduced in 1956.

The Ref. 6542 had a relatively short production period of five years, before being replaced by the fan-favorite Ref. 1675 in 1959. The updated model was equipped with crown-guards and a hacking movement. It is the archetypal Rolex GMT Master we all know and love. It has been produced in a variety of colors, in steel, gold and two-tone variants and with different bracelet options.

In 1981, the Ref 16750 was introduced, which came with a quickset date and a higher water resistance of 100 meters over the Ref. 1675’s 50 meters. It was accompanied by the Ref. 16760 in 1983, also known as the GMT Master II. For the first time, the fourth hand could be individually set, upping the number of trackable timezones from two to three. The two versions coexisted for about five years. The Ref. 16760 featured a sapphire crystal and a slightly thicker case, earning it the nicknames “Fat Lady” and “Sophia Loren”.

The GMT Master is still a watch that exudes adventure. It is all about globetrotting in style. It is both rugged and elegant, a tool and a piece of jewelry. You can opt for that iconic blue & red look, or go for an almost-Submariner-like black version. And as with all Rolex, there are loads of rare and exotic versions to be found.