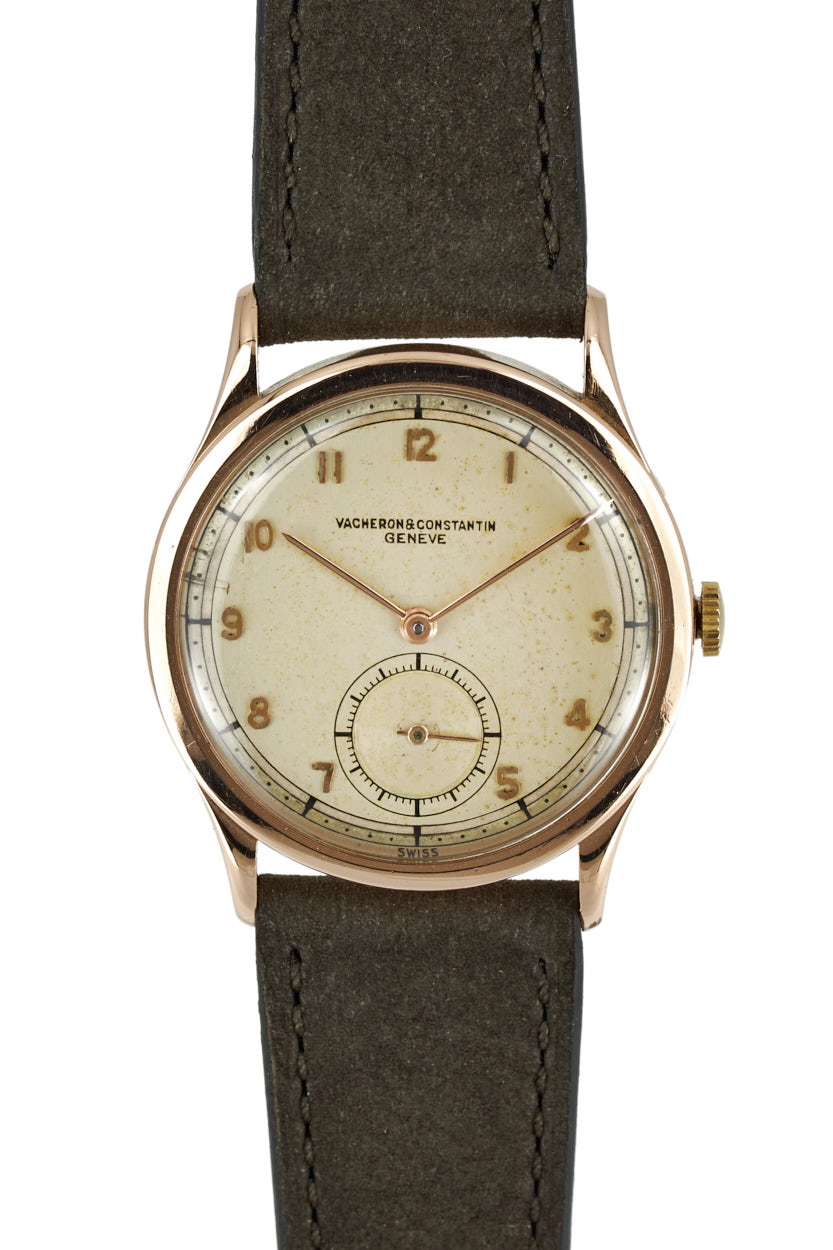 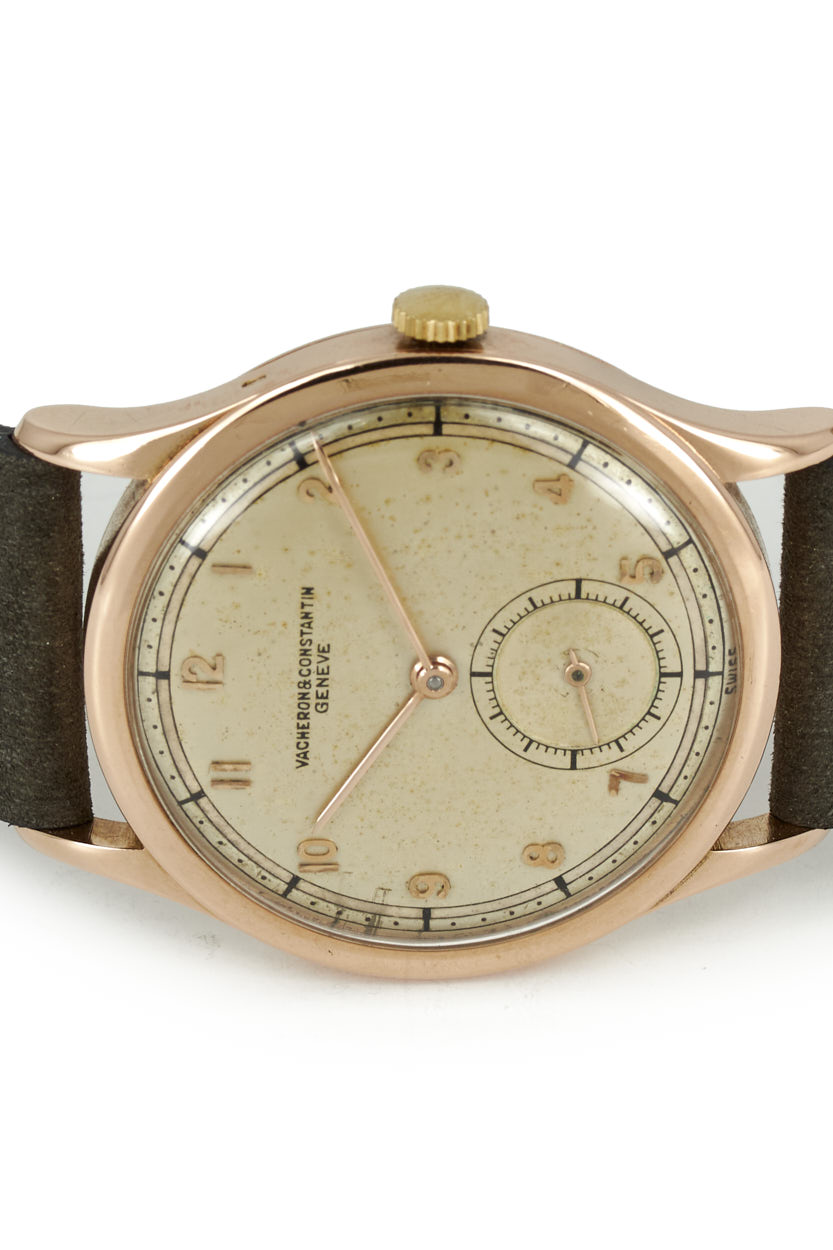 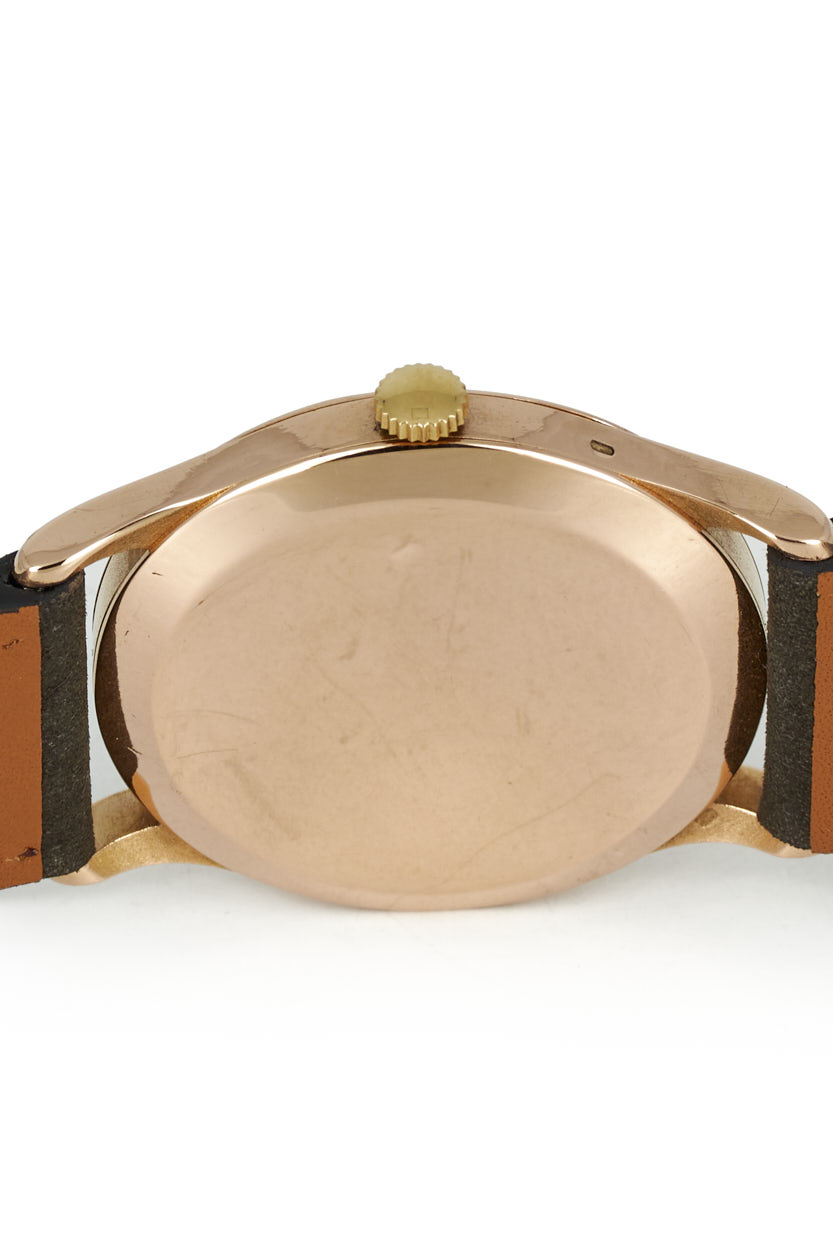 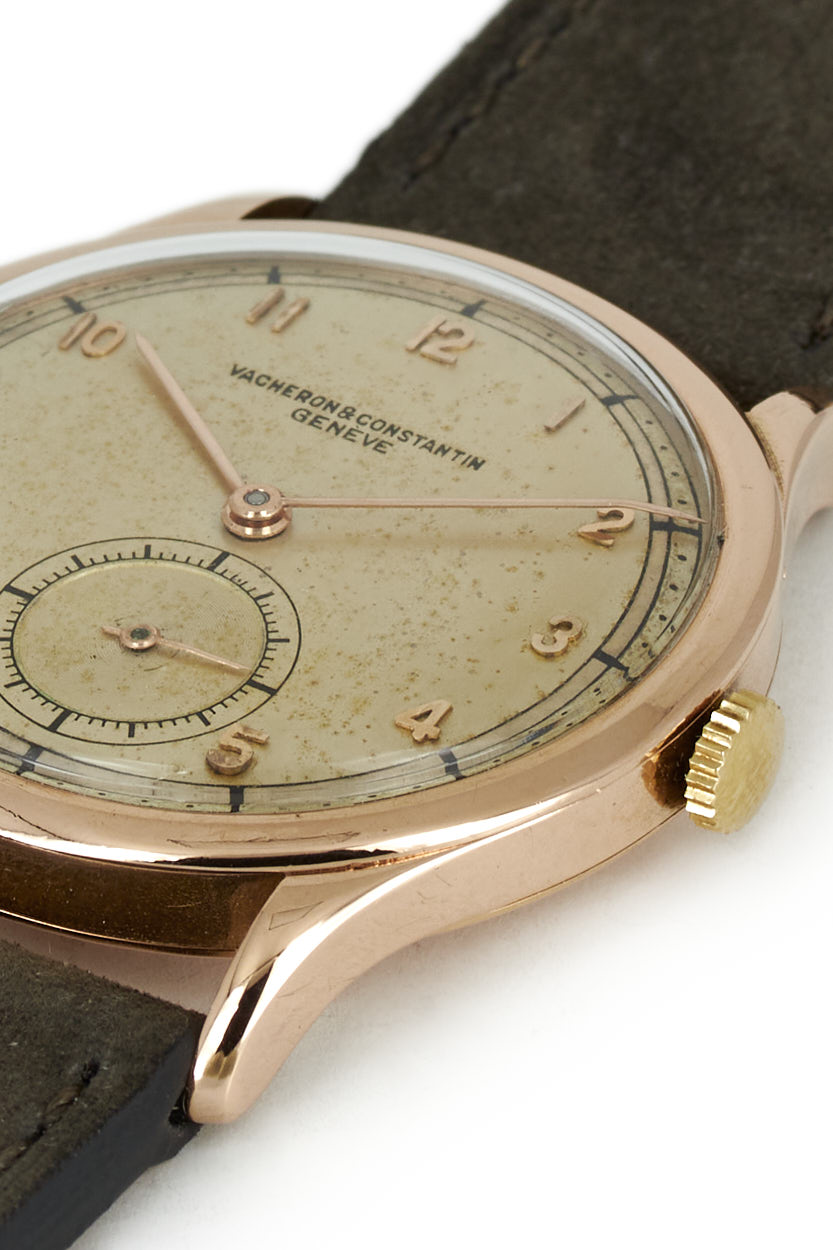 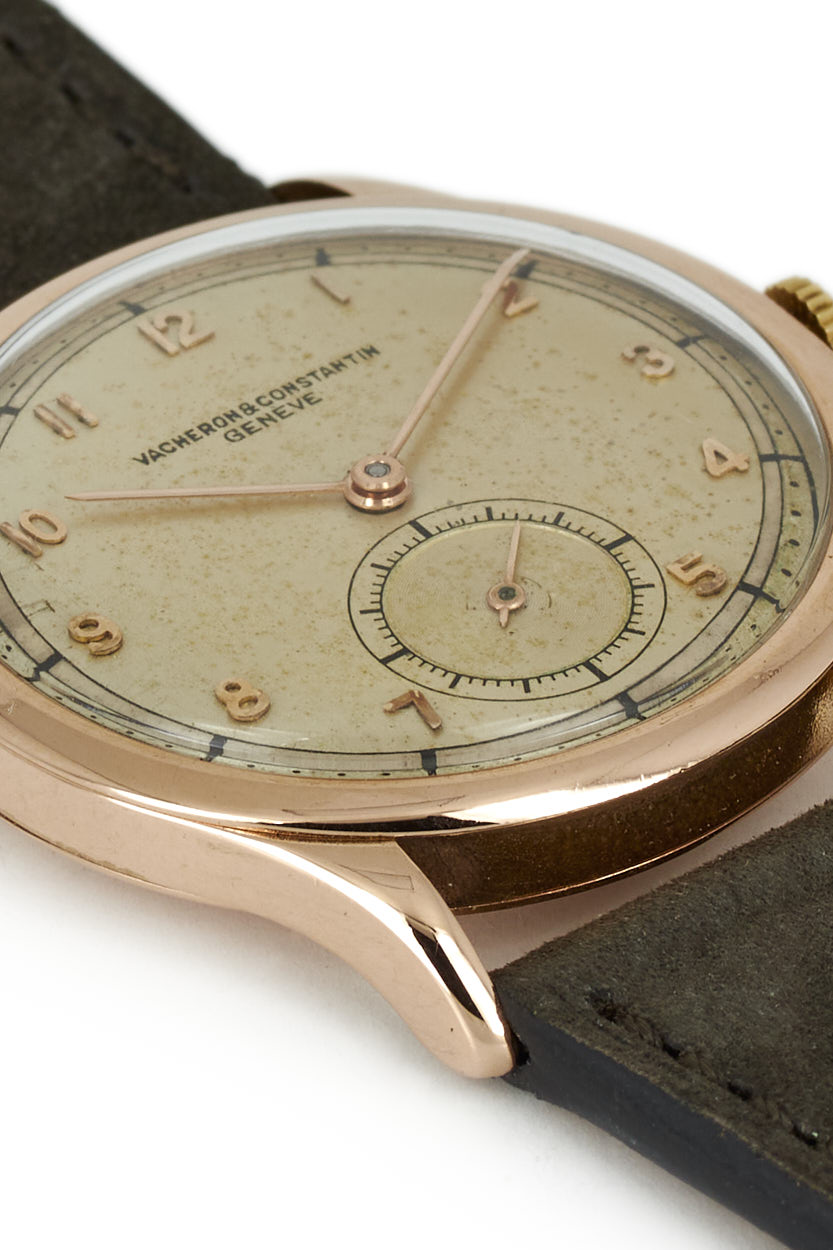 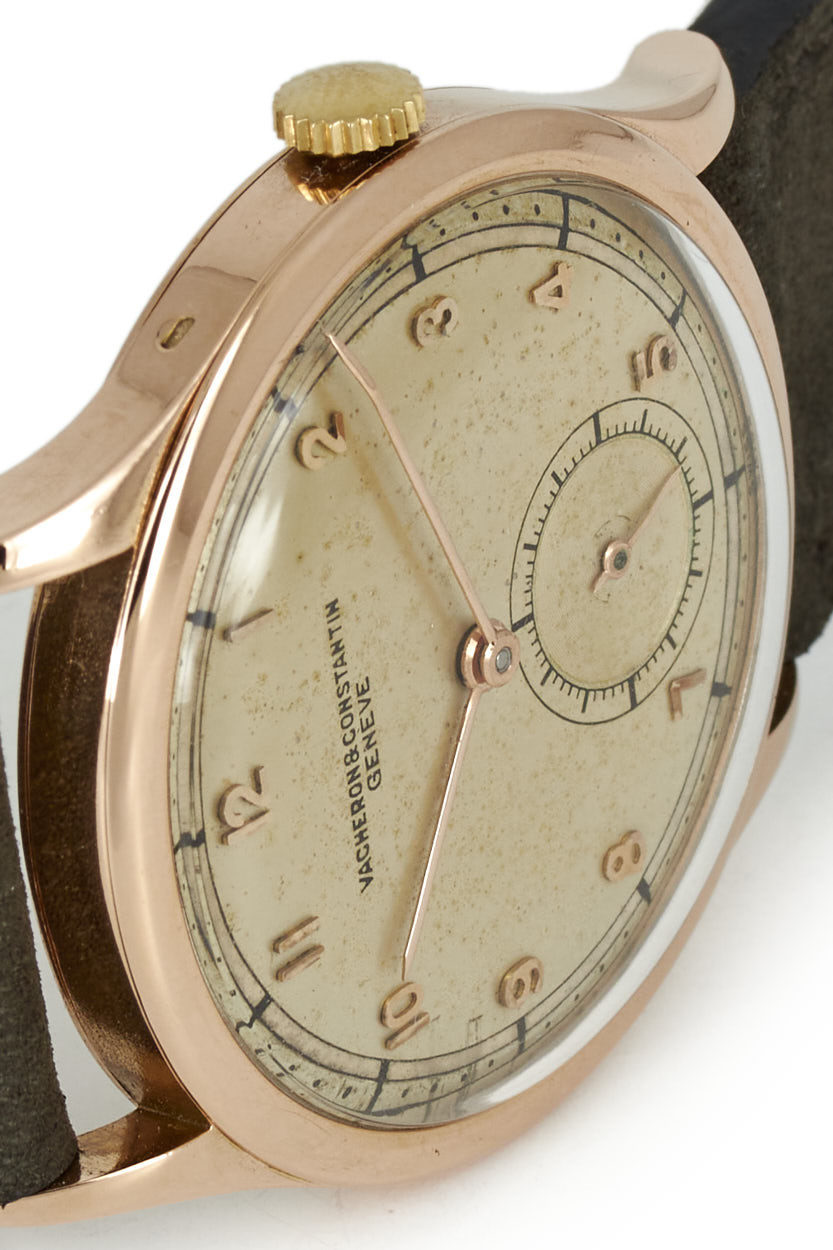 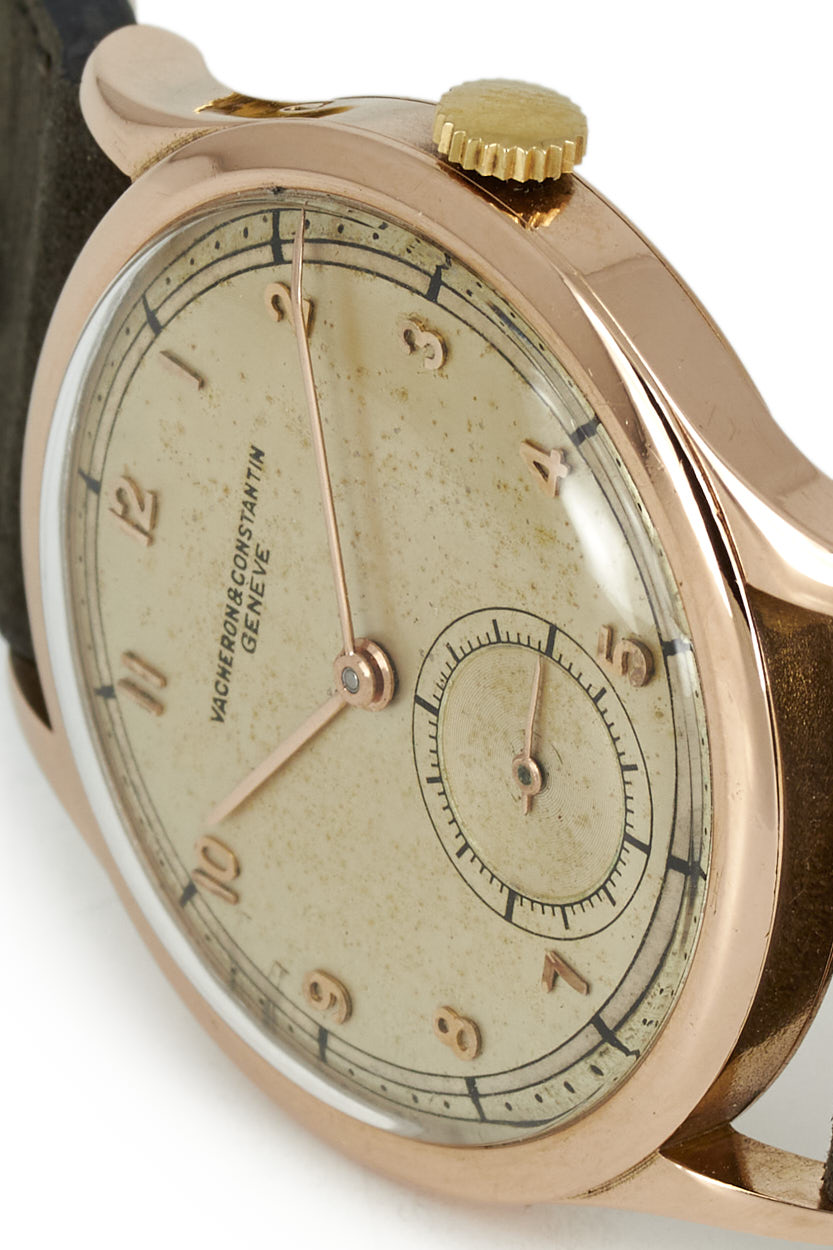 There is vintage, and then there is vintage. Here we have an example of a beautiful Vacheron Constantin Calatrava dress watch that really shows the decades gone by in attractive fashion.

The 18k rose gold case is home to a beautifully patinated dial with old-school printing. It is just a little less precise and crisp than later dials, showing that this is clearly a watch from the 40’s.

The case measures in at just 33,5mm but wears quite large. While this is surely a subtle watch, it has some serious wrist presence.

This is one of those watches that becomes a time capsule on the wrist. It brings you back to days gone by. It has that charm of yesteryear. Come and have a look at it up close and personal. It will charm you!

Vacheron Constantin is the oldest Swiss watchmaker, having been in continuous existence since 1755. The three iconic Swiss houses of Patek Philippe, Audemars Piguet and Vacheron Constantin are lovingly referred to as the Holy trinity by watch lovers around the world.

Vacheron Constantin is an old school Swiss watchmaker in the truest sense. They are known for complicated in-house calibers, advanced decorating techniques and extreme levels of fine finishing. They have numerous inventions and patents to their name, among which the first non-magnetic movement in 1885 and the world’s thinnest movement in 1955. In 2015, VC created the most complicated movement ever made, featuring a mind-blowing 57 complications.

Vacheron Constantin is known for its decorating prowess, which you can clearly see by their current Metiers d’art collection. These works of art feature extremely fine engraving and enamel work. All, of course, done by hand by highly trained artists.

But VC’s catalogue is not limited to complicated dress watches. Back in 1977, Vacheron Constantin joined the luxury steel sports watch game. After Audemars Piguet had launched its Royal Oak in 1972 and Patek followed with the Nautilus in 1976, VC introduced the Ref. 222 a year later. The distinctive watch with integrated bracelet was named in celebration of the house’s 222nd anniversary.

The Ref. 222 would remain in production until 1985 and provided some much needed youthful freshness to Vacheron’s offerings. Eleven years after its discontinuation, the Ref. 222 would be succeeded by the Overseas, a new sports watch from the fabled brand. A design riddled with hints to the house’s logo: the Maltese cross.

Vacheron is a real connoisseur’s house. It probably wasn’t the first brand on your list when you got into watches. But once it appears on your radar, it will enchant you with truly magnificent watchmaking in many different forms.