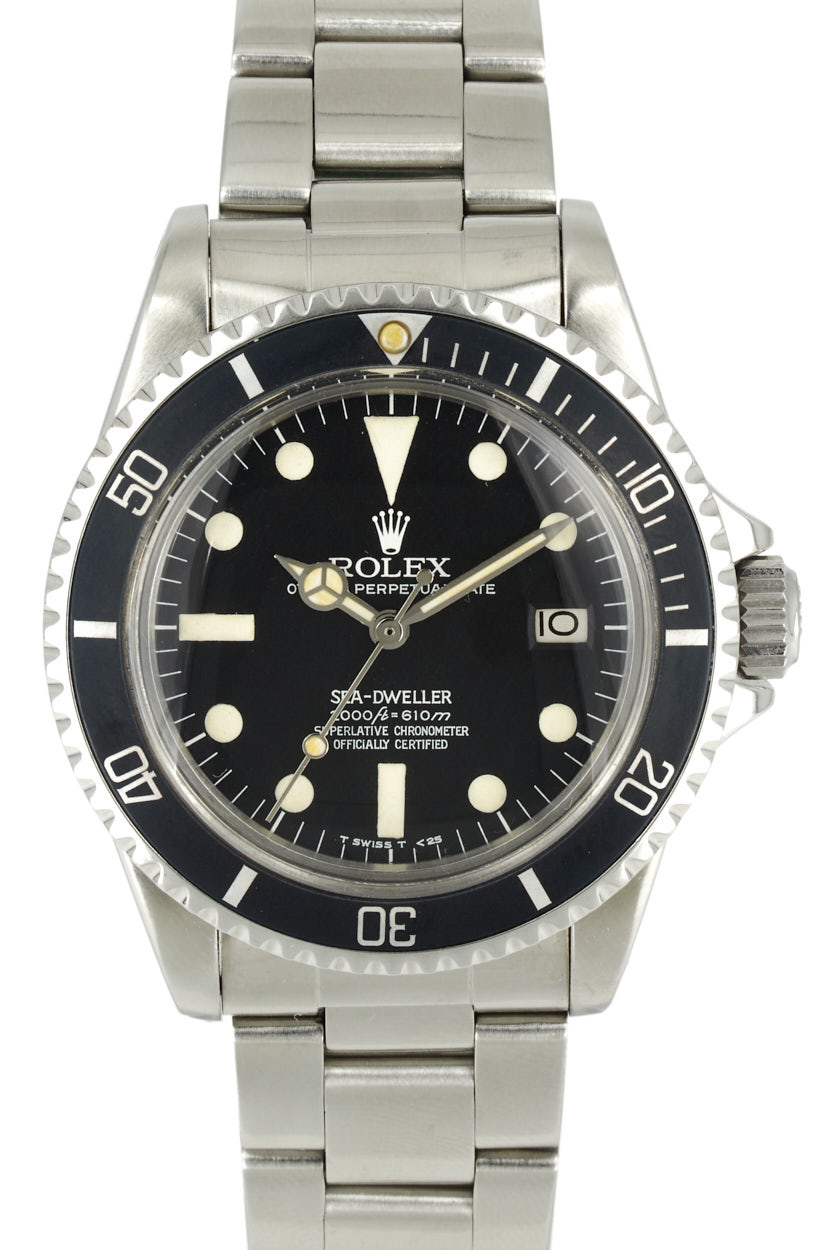 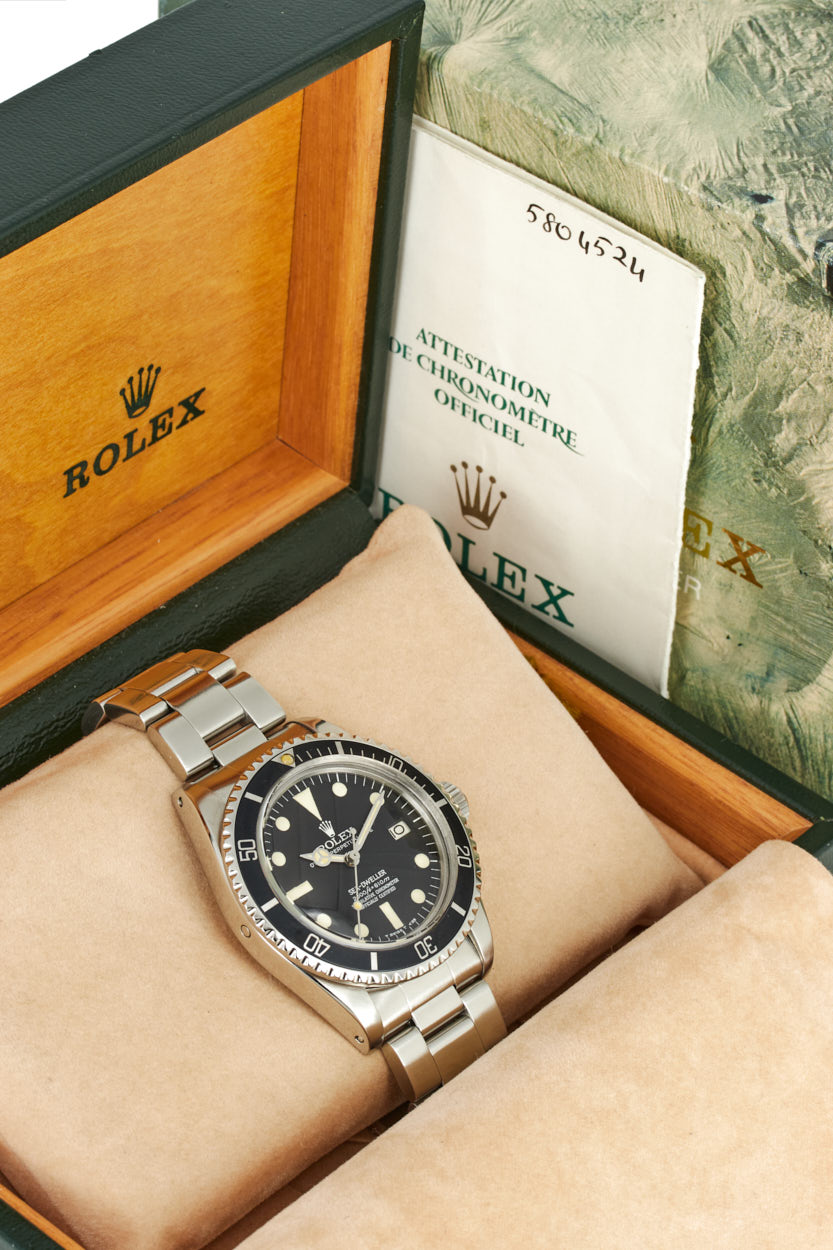 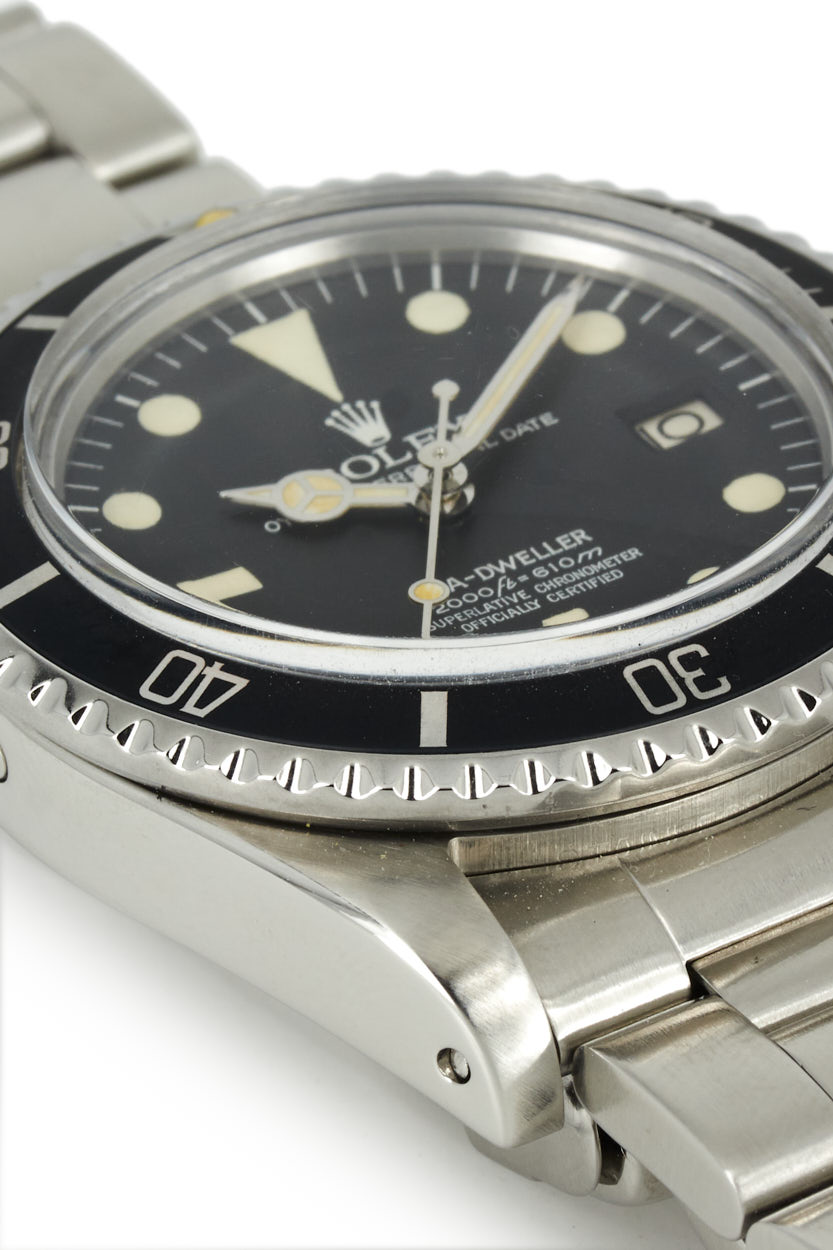 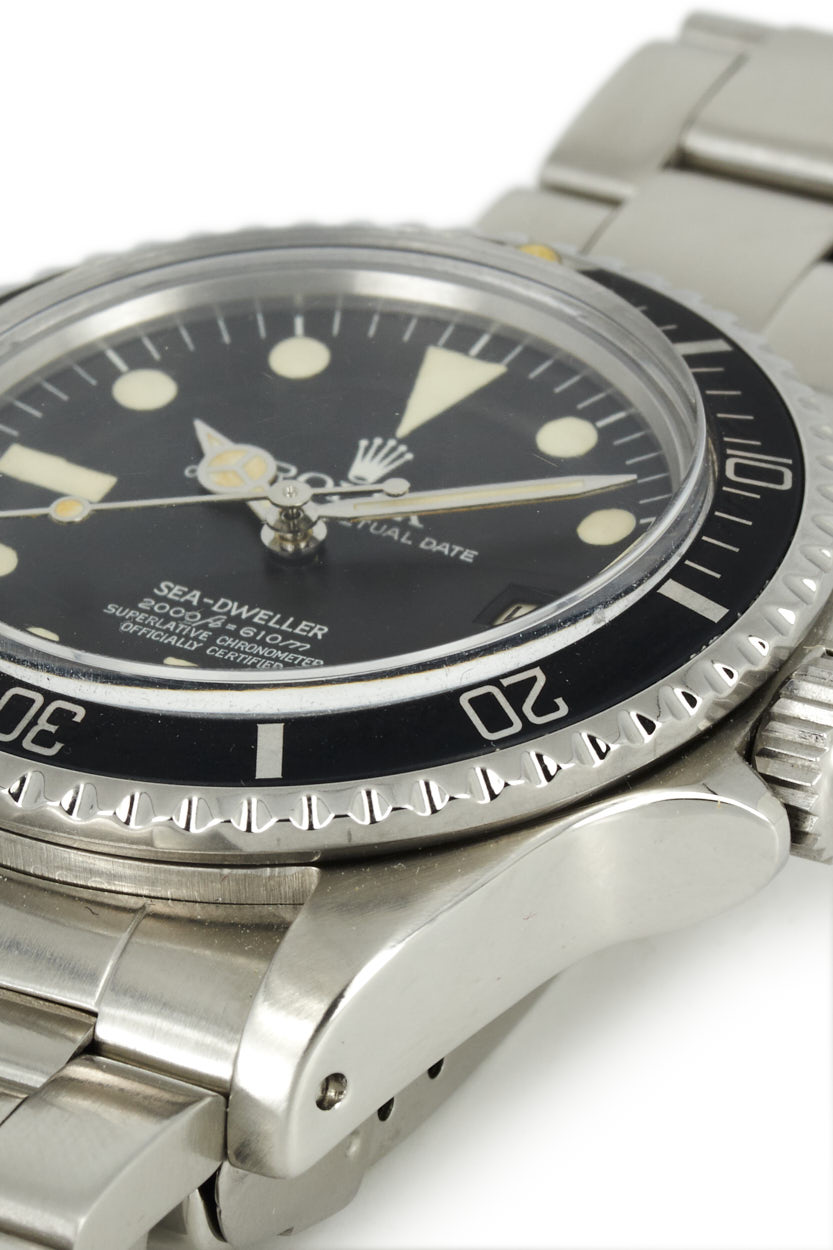 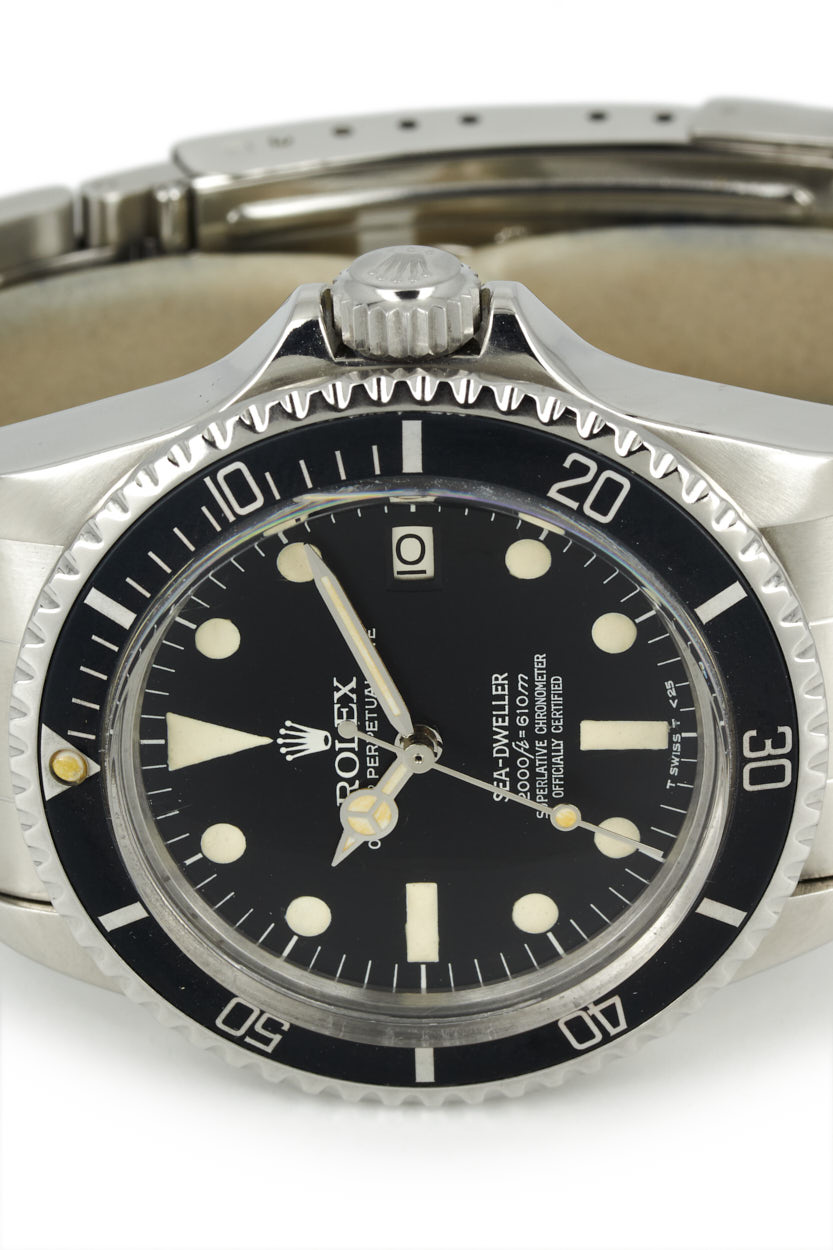 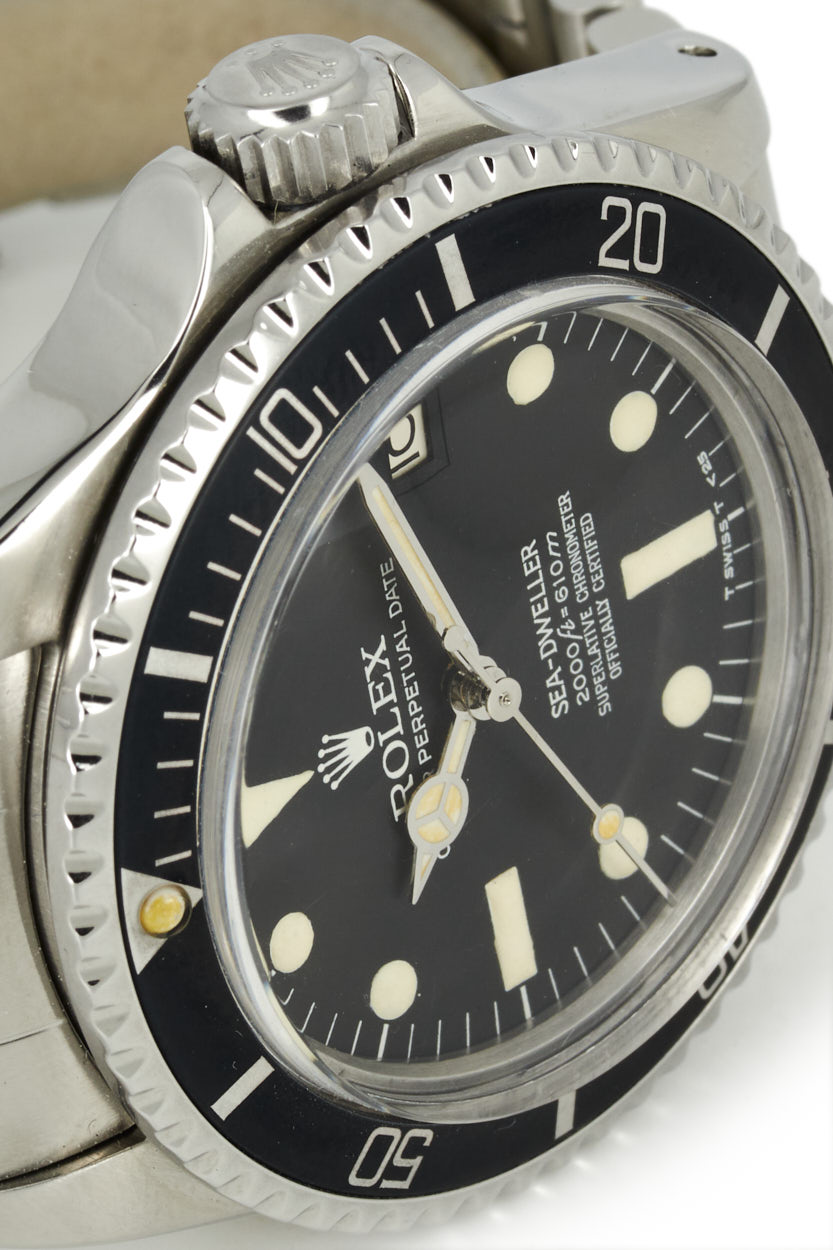 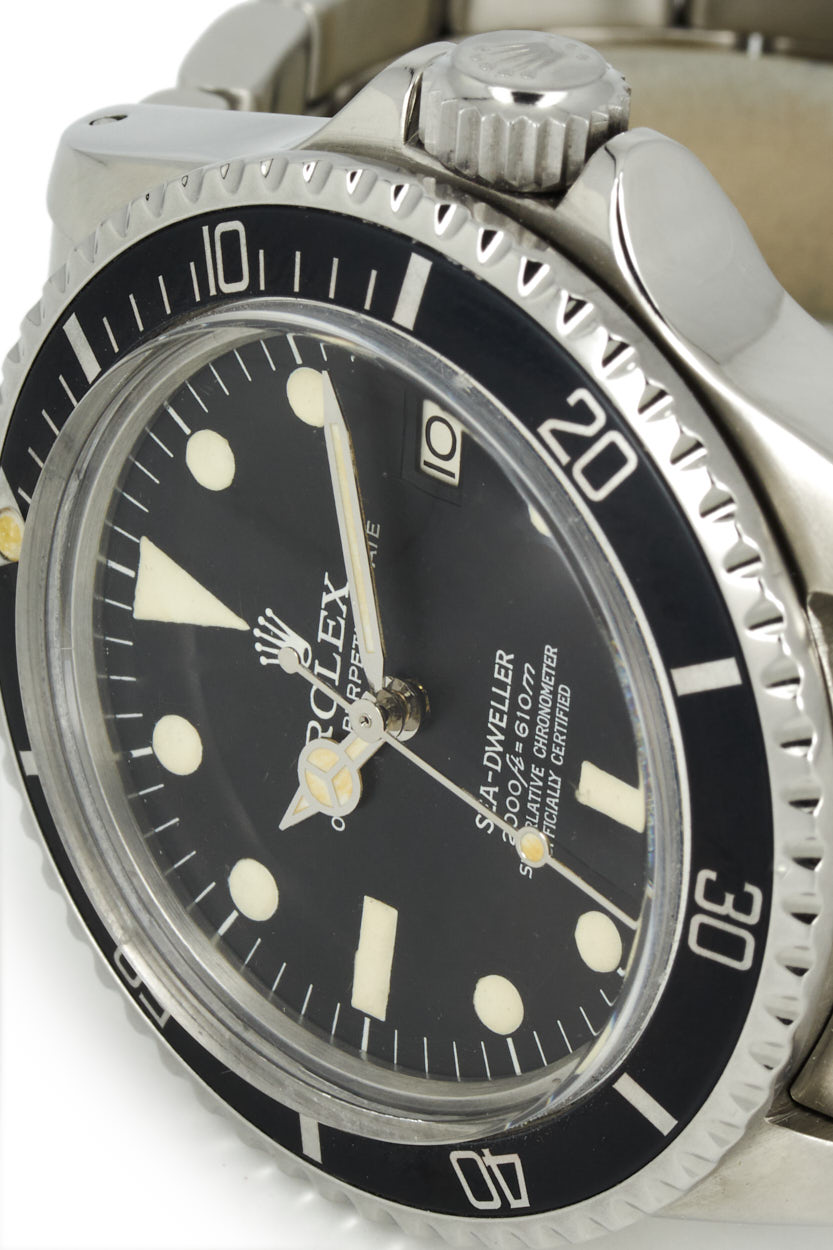 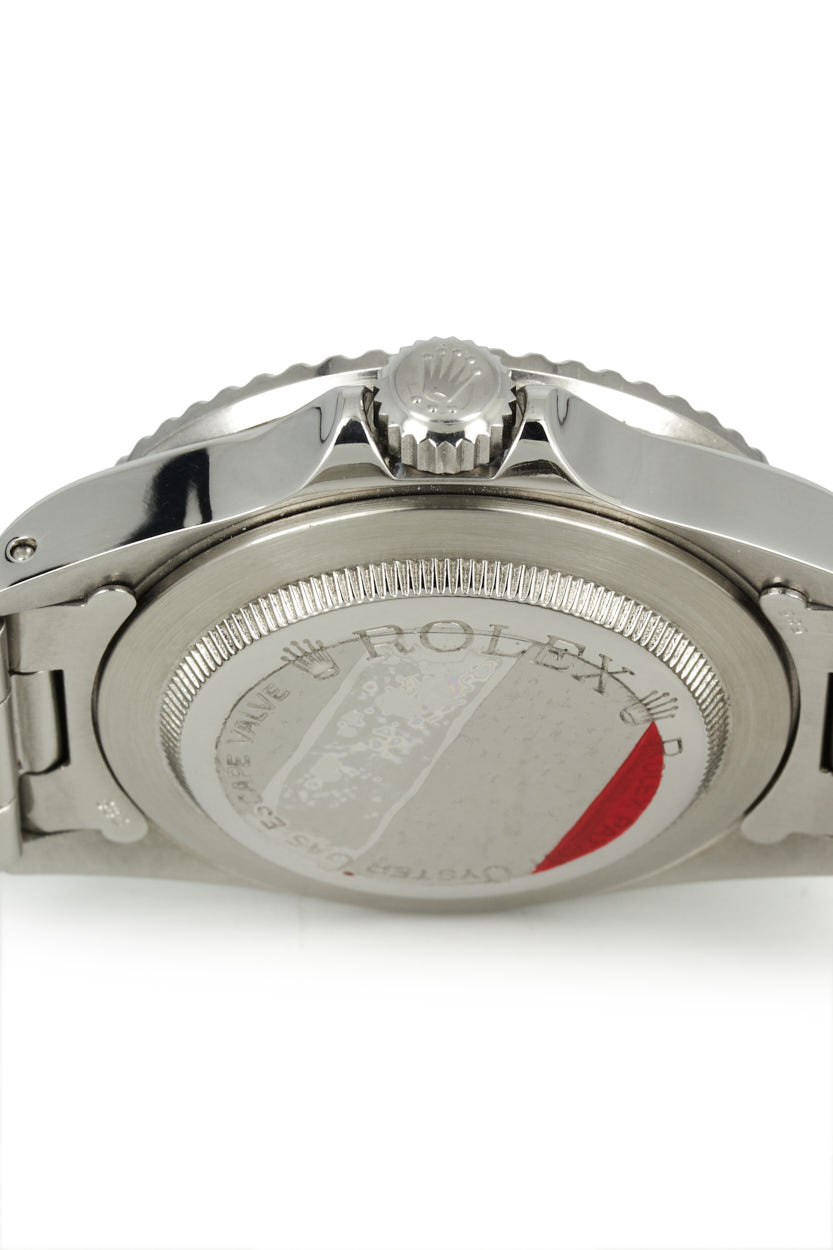 We are proud to offer a Rolex Sea-Dweller Ref. 1665 “Great white” in beautiful condition!

The example we see here is a rare MK2 “Rail Dial” variant, correct for the 5.8m serial number. It comes with absolutely beautiful even cream-colored tritium all around, including the lume pip in the bezel inlay.

The lume contrasts beautifully with the bezel, which has taken on a dark-grey tone with just the slightest hint of blue. It is an absolute beauty to behold.

This stunning Great White from 1978 comes on a 1984 Oyster bracelet, also in very good condition. The watch is complete with box and papers, a seriously collectible set!

The Sea-Dweller is a more hardcore version of the Submariner. Quite literally, as it was developed with French marine engineering company Comex on the Submariner platform, to withstand greater depths. The Ref. 5514 Submariner formed the starting point. A tougher case back and a helium escape valve were added, upping the water resistance to 2000 feet or 610 meters. The Sea-Dweller Ref. 1665 was born in 1967.

A date complication was required, because many professional dives and decompression sessions would last days or even weeks. The helium escape valve prevented the crystal from popping out when saturation diving. An issue the Submariner would never run into during more casual SCUBA dives.

The Ref. 1665 came in several different dial variants, throughout its 16 years in production. From Double red Sea-Dwellers to Great whites and several subtle variations with differing degrees of rarity within those variants. A particularly legendary version is the Single red, of which only 12 are known to exist.

The Rolex Sea-Dweller was updated to the Ref. 16660 in 1978. The tritium dial was replaced by a LumiNova version in 1998/99. Several other variations exist within this reference. Later updates, among which the Deepsea and the James Cameron, saw an increase in size and a ceramic bezel, among other updates.

The Sea-Dweller is arguably the most toolish of all Rolex models. Where the Submariner has become a cross-over between diving and casual wear, the Sea-Dweller always remained a tool for exploring the bottom of the ocean. While quite similar to the Sub in appearance, it does convey a lot of that feeling when you handle it. So if you are of the adventurous inclination, the Sea-Dweller might just suit you perfectly. And do not worry if you put a scratch on it. Looks even better!